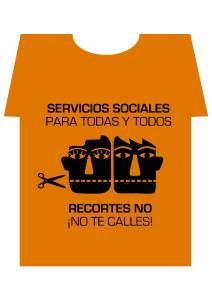 In 1939, Social Worker Abbott Grace helped draft the Social Security Act. Every fiber that weaves together today’s social safety net for our most vulnerable populations included Social Workers in the development of those historic legislative pieces.

Present day, when social issues are being discussed, Social Workers appear to be missing from the national conversation. This is not the case in Madrid, Spain were Social Workers are marching to protest cuts in social services. The General Council of Social Work is one out of its 900 member Social Summit that convened the march according to their website.

The General Council of Social Work also states on its website that the government has cut funding to social services by 42% in recent budgets resulting in the collapse of human services and resources for the poor.  The website further states that Social Workers can not stand by and watch the devastation caused by these cuts that are wreaking havoc on the most vulnerable populations. They argue that everyone suffers when basic human dignity is not given to all.

When I read about the plight of our Social Workers across the sea, it provided a foreshadow for what’s to come in America. If American Social Workers continue to operate with blinders on, the proposed Romney/Ryan budget will devastate our profession and those who we are charged to serve and protect. Do we really need to wait until after it happens to try and reverse the damage?

Self-Care, What Exactly Is That?