byPanagiotis Pentaris
in Education, LGBTQ
0
ADVERTISEMENT
Share on FacebookShare on TwitterShare on LinkedinShare on PinterestShare via EmailShare on Reddit 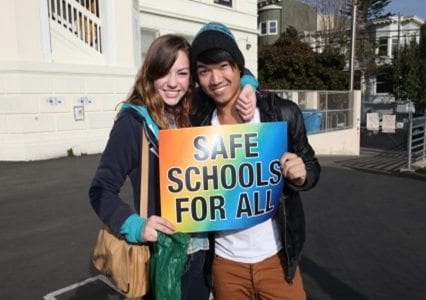 No one should be afraid to be gay or an LGBTQ individual at school.

Just recently, another bullying effect was captured by the media in the UK. In the suburbs of York, in one of the public schools in the area, an 11 year old boy was bullied because of his intention not to hide who he is.

What I want from this post, is to raise your thoughts on the issue. If we all try to think what consequences such an event will have on the boy’s life in the future and while growing up.

No one should ever be afraid to be him or herself in the school environment. There are many different issues arising from this instance. Bullying has expanded drastically due to the unintended rage of the youth, which may be based on social reasoning.

How could anyone “blame” their peers for such a behavior? A behaviour that has been copied from the social world kids know of. 11 year old children, almost teenagers, have been through socialization that promotes and enhances such behaviors, as opposed to “shut them down”.

Then again, what about social policies, programs, and services that the schools have to offer? What about the teachers and the staff who are there on a daily basis and experience the institutional culture of the school? What about the parents who receive messages from their children that something is wrong, or that they cause wrong ((in the case of a bully)? What about the decision makers, especially in the UK at this time, when the strands of Equality and Diversity have been revised and enhanced more?

Creating hate for who we are is not accepted by a certain number of people or populations or cultures, and should be unacceptable in the contemporary world where development and evolution take place. The science of social work should see through these occasions and grasp the challenges that arise, take a step forward, create policies, raise awareness, and network and/or link people and organizations. It is crucial for social workers to understand to distinguish what the professional values are and promote those to the systems that request assistance.