Marian Wright Edelman: What Can I Do 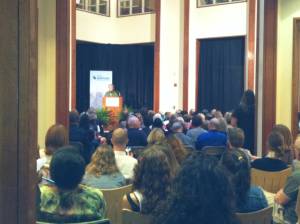 On October 25, 2012, Marian Wright Edelman, Founder and President of the Children’s Defense Fund spoke at the Duke University Terry Sanford Public Policy Building in Durham, North Carolina. I had the privilege of attending this event along with many others who were interested in hearing her views on poverty and education. Ms. Edelman spoke in detail about the challenges children in poverty face in receiving a quality education. The event was sponsored by the Crown Lecture in Ethics, named after its benefactor Lester Crown, which was established to bring speakers to Duke in order to discuss ethics in arts, sciences, medicine, business, and other areas.

Ms. Edelman, a graduate of Spellman College and Yale Law School, began her career as the first African-American woman admitted to the Mississippi State Bar. She led the NAACP Legal Defense Fund in Jackson, Mississippi before moving to Washington, D.C in 1968 as counsel for the Poor People’s Campaign created by Dr. Martin Luther King. Ms. Edelman also served as the Director of the Center for Law and Education at Harvard University for two years, prior to creating Children’s Defense Fund in 1973. Ms. Edelman was also award our country’s highest civilian honor, the Presidential Medal of Freedom, as well as the Robert F. Kennedy Liftetime Achievement Award.

The theme of her speech was ” What Can I Do….Is the Question?”. She points out that society appears to be waiting for the next charismatic leader like Dr. King to lead us into the next movement of our day. However, Ms. Edelman points out that civic engagement must begin with each of us asking, “What Can I Do”.  She offered several lessons that she has learned from Noah’s Arc, and there were a couple that were really insightful for me. The first lesson was “Don’t Miss The Boat” which means listening to naysayers and critics may prevent you from fulfilling your destiny. The other profound lesson was that Noah’s Arch was built by an amateur and the Titanic was built by professionals. In essence, one’s status or level of importance does not determine the depths of one’s abilities and achievements. In conclusion of her speech, Ms. Edelman prayed for underprivileged children. However, she also said a prayer for children of privilege blessed with high intellect yet a low quotient of compassion.

The event was not without its controversy as a result of Ms. Edelman’s strong advocacy for Charter schools in lieu of public schools. During the Q & A section, a public school teacher had to be removed by security as result of his strong opposition to Ms. Edelman’s position and possible profit-making motivations for advocating for Charter Schools. In my observations of the event, I noticed a lot of educators, lawyers, and community members, but once again where were the Social Workers. How can there be a conversation about increasing outcomes for the poor without Social Workers being apart of that conversation? Charter schools or Public Schools, how much does the quality of an educational facility matter when a child is being abused and/or neglected at home? It feels like everyone is discussing what dishes to be served for a five course dinner, and what desserts to have without given thought to the table and chairs.

Social Media for Social Good Series: Why are Search Engines Ignoring My Content

Social Media for Social Good Series: Why are Search Engines Ignoring My Content