byBrian Anderson
in Social Work, Sports
0
ADVERTISEMENT
Share on FacebookShare on TwitterShare on LinkedinShare on PinterestShare via EmailShare on Reddit 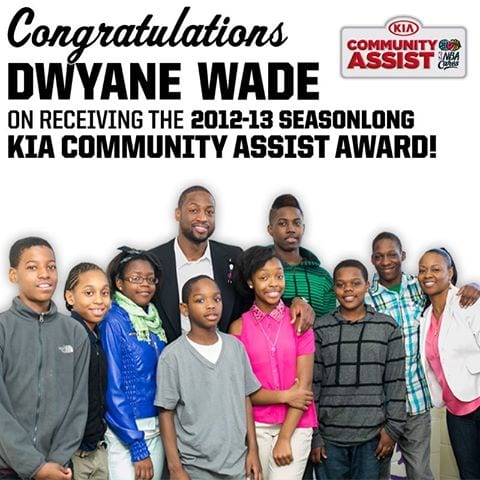 As we all know, the NBA Finals are in full gear right now. The Miami Heat and San Antonio Spurs are locked in a classic series, as both teams battle to win another NBA Championship. While the whole world is focused on the play of the superstars on the court, I want to focus on some of the things one player, Dwyane Wade, is doing off the court to make a difference in communities across America.

Every year the NBA gives out the Community Assist Award. The award honors the NBA player who best reflects the passion that the league and its players have for giving back to their communities. Dwyane Wade took home award for the 2012-2013 season, in recognition of his outstanding efforts in the community and his ongoing charitable work. Wade’s passion is felt throughout the whole entire NBA. Players, coaches, and owners are inspired by Dwyane’s heartfelt efforts to make a difference in the lives of kids all over the nation.

In 2003, Wade founded the Wade’s World Foundation. The foundation is known for its support with literacy, health, and fatherhood primarily in less fortunate communities around the Chicago, Milwaukee, and South Florida areas. Wade’s vision to help others began at the age of 7. When normal kids were worried about toys, and having fun, Wade was concerned about the health of his surrounding communities.

Wade was inspired by news articles that featured celebrities visiting schools to read stories and offer words of encouragement to students. Wade wanted to be that person who brought smiles to those kids faces. Wade vowed that if he ever become successful, he would become a positive figure for kids to look up to. After years of hard work, dedication, and practice, Wade is that person that kids look up to. In December of 2008, a Florida woman’s nephew accidentally burned down the family home. Wade heard of the incident and reached out to the family by purchasing them a new home, including furniture, and clothing. In September of 2009, Wade donated $25,000 to keep a Robbins, Illinois public library from shutting down.

Wade deemed the contribution as “small” and mentioned that he was not always able to help others, instead he was the one who needed the help then. Now that he had the opportunity to make a difference, he would always be there to lend a hand to those in need.

In 2010, Wade’s biggest contribution came when he joined former teammate, Alonzo Mourning’s efforts to raise money for the victims of the destructive earthquake in Haiti. In just a few days, over $800,000 was raised with the help of fellow athletes and friends.

No matter what happens in the NBA Finals, whether Wade wins another championship or not,  he will still be a role model, and leader for kids all over the world. No championship ring can compare to the feeling of being there for people who need it the most. For Dwyane, basketball will always come second to helping people.

Wade knows what it’s like to not have anyone to look up to. He also knows the feeling of not being able to eat some nights, and he’ll go to extreme measures to keep as many kids as he can from becoming familiar with some of things he became familiar with as a child. Wade’s mission is far from over, but he’s already made a big difference in the lives of hundreds of families.