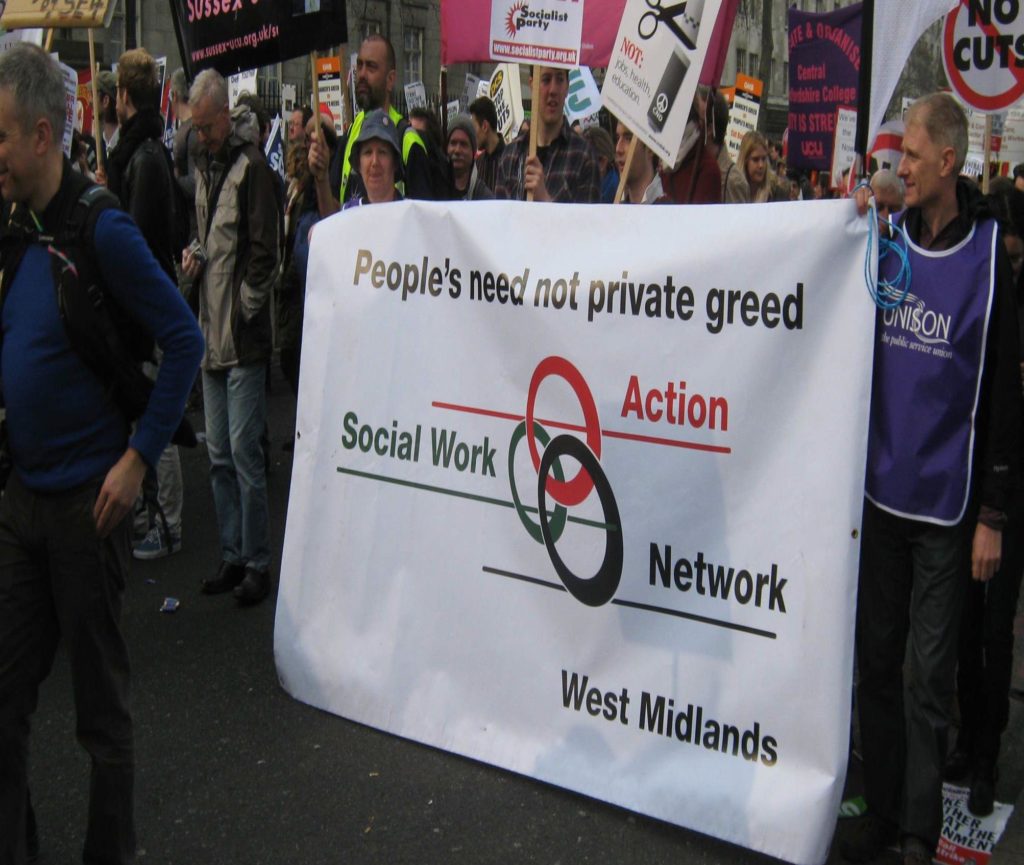 In the wake of austerity, there appears to be a resurgence of a social work movement to address the increasing inequities being forced upon vulnerable populations. Social Workers around the globe are revisiting and taking notes from generations passed in how they responded to the onset of the civil rights movement.

Recently, I interviewed Dan Morton who is on the steering committee for the Social Work Action Network (SWAN) in London, United Kingdom. We discussed how austerity policies by global governments are causing social workers to become more involved in politics. Here is our discussion:

SWH: What is SWAN, and What types of issues do SWAN focus on?

DAN: The Social Work Action Network (SWAN) is a radical campaigning social work organisation which was formed in the UK in 2004, and it sees itself in the tradition of 60’s/70’s radical social work movement and the magazine ‘Case Con’.

What makes SWAN different from those days, is that we are a partnership of practitioners, service users, educators and students. While SWAN still has a large membership in the UK and rotates its national conferences here, it has a strong international focus – there are SWAN groups or similar organisations elsewhere in Europe, America, Asia and Australia.

SWAN sees the value in both collective practice and good relationship based individual social work, but understands that social workers must analyse and act upon the social problems they encounter with a close eye on structural and cultural influences on people’s lives. In the present international context, that means understanding austerity as a project of neoliberalism and opposing its levers in social policy – managerialisation, marketisation and privatisation. We understand the links between capitalism, crisis and the inequality and social devastation it causes. Instead we are broadly in favour of a model of human rights and partnership based practice, radical community work and a comprehensive, progressive social security system. The notion of linking ‘private troubles to public issues’ is a touchstone for SWAN.

SWH:  What is the mission and vision for SWAN in the wake of Global Austerity?

DAN: SWAN has strong links to progressive global social movements, for instance Occupy and the wider anti-capitalist movement. We are keen to support those involved in social action such as colleagues in Greece and more recently Turkey. We also have also run defence campaigns when social workers are attacked or vilified, such as Norbert Ferencz a Hungarian social worker who was arrested for speaking out against a law to criminalise rough sleepers. Likewise, in the wake of the Baby Peter tragedy in the UK some years ago, SWAN defended practitioners against the British tabloid The Sun‘s witch hunt against social workers, by highlighting unbearably high case loads, lack of resources and support experienced by many practitioners.

SWAN has often reconfigured the anti-capitalist phrase ‘another world is possible’ to ‘another social work is possible’ – we live out our methods for practice while we work towards that world through respectful alliances between practitioners, trade unions, grassroots movements, user lead organisations and pressure groups.

SWH: What are SWAN’s highest priorities?

DAN: At present to continue to build our networks and encourage practitioners and those who use services to work collectively against inequality and oppression. This means working with trade unions and service user movements to avoid divide and rule. While imperfect, we need to defend what system of social support we have left while envisaging something better. While we are under a sustained attack in the UK which is resulting in a marked increase in poverty, in Greece we have seen people turning their children into social services, as they have no way to buy the necessities of life for them.SWAN has a network of regional groups in the UK and in Eire and they will have their own particular priorities.

At the moment anti-racist social work is especially important in the wake of increased far-right activity in the UK (the rise of the English Defence League and Islamophobia in the UK, the brutal attacks on Roma in Eastern Europe). We must continue to work with disabled people to refute attacks dividing them as either ‘lazy scroungers’ or ‘worthy strivers’.

SWH: If someone wants to become more familiar or collaborate with SWAN, where would they find you on the web, and what key points do you want them to know?

DAN: SWAN has an English language website – www.socialworkfuture.org – and a Facebook site. Our twitter handle is @swansocialwork. We gladly welcome written contributions on radical practice both in the UK and internationally- email swansocialwork@gmail.com. We would also be delighted to have more folk in the US and Canada link up with us, though we do have connections already in some cities and states. In terms of key points, we would ask practitioners to look at the global neoliberal project over the last 30 years and the attendant rise in inequality and social problems. What do you feel the priorities of a social worker should be?

5 Do’s and Do Not’s of Interviews

5 Do's and Do Not's of Interviews