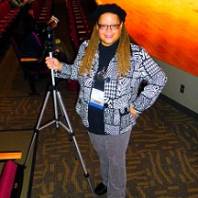 A jolt was sent through the LGBT blogosphere when the groundbreaking lesbian blogger, Pam Spaulding, “blogmistress” of Pam’s House Blend, announced this week that after 9 years she is closing down her blog on July 1. One of the first LGBT political blogs to rapidly rise in the early years of political bloggers, Spaulding had become a must-read for political junkies and LGBT people across the country, offering her perspective as a black lesbian living in North Carolina, far beyond the big cities in the North and West Coast that dominate LGBT politics.

“Pam is certainly the most important lesbian blogger in America. She’s a lesbian in a gay blogging world that is overwhelmingly gay men. She’s a blogger as a woman in an overwhelmingly male-dominated world and she’s of color and the internet is so skewed to the privileged.” Read More…

Over the years Pam has acquired several milestones and awards…

The cause is not forgotten, a new channel debuts on FireDogLake.com(FDL), Justice For All, that will take on many of the same issues covered by PamsHouseBlend. Pam is still interactive online and can be reached on facebook, twitter, and google plus.

Listen below as Pam explains why she has chosen to close her blog: