The Tragedy of Hydraulic Fracking

byJeffrey Lee
in Global, Politics
0
ADVERTISEMENT
Share on FacebookShare on TwitterShare on LinkedinShare on PinterestShare via EmailShare on Reddit 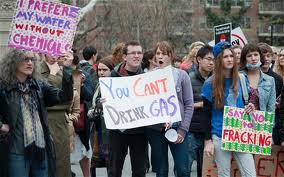 The documentary “GasLand” presents a compelling argument against the production of natural gas resources, commonly known as fracking, throughout various regions of the United States.  The creator of the film Josh Fox is a resident of Pennsylvania which sits on one of the world’s largest shale deposits. Mr. Fox weaves an unpredictable picture that reflects the negative effects of the instant fortunes natural gas drilling can bring.  In order to understand why Mr. Fox felt compelled to create his film, we must first have a basic understanding of shale and the process of natural gas drilling.

The Marcellus Shale covers portions of eight states with the largest portions being located within New York, Ohio, Pennsylvania, and West Virginia.  According to Geology.com the Marcellus Shale, also referred to as the Marcellus Formation, is a Middle Devonian-age black, low density, carbonaceous (organic rich) shale that occurs in the subsurface beneath these states.  This shale exists in most places one mile or more underneath the surface.  Most companies use a method called Hydraulic Fracturing, which is often referred to as fracking.

Geology.com (2012) describes the process as follows:

The unnerving part of this process is not knowing the exact material used in the proppant which is typical sand or another mixture suspended in water or another fluid to maintain the opening to the surface.  There are several chemicals that are used by various companies and no one company uses the exact same chemical mix.  Some of the chemicals used are as follows: Diluted Acid, Biocide, Breaker, Corrosion Inhibitor, Crosslinker, Friction Reducer, Gel, Iron Control, and KCI.  Many of these chemicals are used in household, commercial and medical cleaning products.  Hydraulic Fracturing also requires enormous amounts of water during the process.  In most cases upwards of some 3 million gallons of water per treatment may be required.  Once this water is mixed with the drilling and “proppant” chemicals, it becomes a toxic mixture that has to be disposed of properly or it could mean ecological disaster for the surrounding area.

In some areas of our country, fracking has been going on for years as shown in the movie “Gasland”.  The states of Colorado, Montana, and Texas have been dealing with this issue and have seen ramifications of this practice for decades.  Many residents of these states can no longer utilize their water at all and have been provided water filtration systems by the same gas companies that say “fracking” does not have negative affects on the environment.  One resident reportedly was able to light his water on fire because of the amount of natural gas that as seeped into his water supply.  The ANGA (America’s Natural Gas Alliance) (2012) has since come out and attempted to refute much of what is shown in the movie “Gasland” by stating the following:

According to the Colorado Oil and Gas Conservation Commission, which tested Markham’s water in 2008, there were “no indications of oil & gas related impacts to water well.” Instead the investigation found that the methane was “biogenic” in nature, meaning it was naturally occurring and that his water well was drilled into a natural gas pocket.  This is one of several examples where the film veers from the facts. A second depiction of a flaming faucet in the home of Renee McClure also misleads viewers about the connection between natural gas development and methane in water wells. McClure’s well was sampled by the state of Colorado and it, too, showed only naturally occurring methane.

The major problem surrounding this issues in most states is that this is a cash driven industry that has lobbying organizations like the ANGA that will go to great lengths to make “fracking” seem as harmless as possible.  This issue raises grave concerns when it comes to Pennsylvania and New York especially because of the geographic location of the Marcellus Shale.  The Marcellus Shale sits on a water supply that supplies water to the largest number of American’s in the country, the Delaware River Basin.  The Delaware River Basin supplies water to over 15 million people between New York, Northern New Jersey, and Pennsylvania.  Not to mention the wildlife that inhabits numerous national and state parks throughout the region.  There is current legislation that is being debated regarding this issue in every state mentioned above.  Some drilling has already begun in parts of Pennsylvania and is already affecting families’ drinking water much like those in Colorado.  Pennsylvania Gov. Corbett has taken a different stance on the issue and has focused his concerns and around the economic impact instead of the ecological impact.  According to the Philadelphia Inquirer (2012) on Feb. 8 the legislators met regarding the fees associated with the Marcellus Shale.  The bill, which was sent to the Gov. on Feb. 8th, states the following:

Clearly, the Pennsylvania governor is more concerned with the economic welfare of his constituents than their health.  Maybe all of their newfound money will help them pay for their potentially expansive health issues once the drilling begins.  One thing that is for sure is that once you begin putting chemicals into the earth there is no sure or safe way to get them back out.  This practice can and will place thousands of Pennsylvania residents at risk.