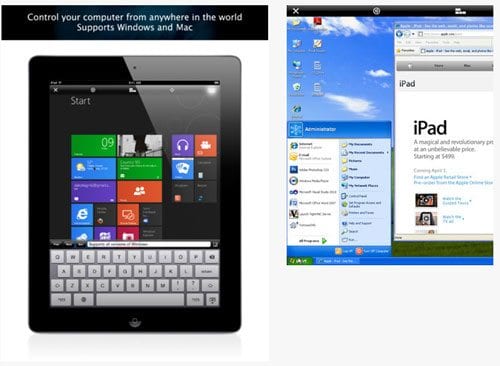 iPhone has become one of the most effective and powerful phone in the current market. It offers a wide range of services to its user. The revolutionary applications of iPhone are capable of monitoring and controlling the operations of PC or Mac. This is something to rejoice as no other OS offers the same feature. Here are some of the top 10 best  iPhone apps to remotely control your PC and Mac:

It is one of the most popular iPhone apps existing in the current market. Using this iPhone app, the user can control and monitor his Mac computer. The dedicated key available in the app allows the user to trigger specific actions on Mac. The interface of this app is extremely simple and hence, it is often attributed to easy usability. The Keymote store available in the iPhone enables the user to choose his set of dedicated keys for different operation on his Mac. Thus, controlling the operations of Mac with the help of an iPhone is not a far cry from the user.

Remote HD is an effective iPhone app that controls the actions of Mac computer and other PC variants. The best part about this app is that it not only acts as a mere remote control for monitoring the actions of Mac/PC, but it works as a VNC (Virtual Network Computing) App. The screen of the computer can be viewed using this app which makes it more comfortable to choose the elements to be triggered by the user using his iPhone.

Another app that supports the VNC feature, Remote Tap 5 facilitates an environment where the user can spot display of the computer and carry out the necessary operations. Another advantage with this app is that the user can zoom the PC view by 4 times. Hence, it forms a great part of the list of top iPhone apps to remotely control the Mac/PC.

As the name suggests, this app lets the user perform actions on their PC/Mac by acting as a track pad or sometimes even as an air mouse. The app integrates well with almost all the OS, being it Windows, Linux or Mac.

This is the most acclaimed iPhone app which offers 8 features within one app. It enables the user to monitor his Mac or PC with the help of iPhone. One of the unique features equipped in this app is that it catches the IP address of the computer without taking much time and makes use of Wi-Fi network to control the actions of PC/Mac. It can be used as a mouse, keyboard, touch pad, text pad or even a launch pad. These are the qualities that make Wi-Fi remote as a popular app.

One of the top rated iPhone apps, iTeleport makes use of a Wi-Fi or 3G connection in order to control the actions of Mac or PC. The desktop of the Mac/PC can be monitored using this app.

This app integrates very well with iCloud and helps the user to control his PC/Mac actions by sharing the desktop apps with iCloud. The connection made between the phone and the computer is very safe and secure using this app. The multi-touch experience provided by Screen VNC sets it apart from the other iPhone apps available in the market.

The Mac/PC configuration offered by this app is extremely quick and efficient. It takes use of a 3G or Wi-Fi connection to perform the controlling of Mac/PC. The several finger gestures provided by this app raise its reputation among the other apps in the market that are responsible for controlling PC/Mac.

The user is swiftly provided an access to his desktop apps using this iPhone app. The ability of this app to allow fetching of files from iPhone to computer is incomparable. The Air Print feature vested in this app enables the user to directly take the print of computer files using his iPhone.

The swiftness with which PocketCloud Remote Desktop app provides access of Windows/ Mac to the user is un-match able. The dedicated keys can be customized according to user’s need and requirement. The customization of keys makes it more convenient for the user to control PC/Mac using this app.

Janice is a creative writer and iPhone lover. She works for softeq apps as mobile application developer, and netspysoftware an amazing product which helps people to track their phones. .