Standing with Texas Women: The Six Degrees of Wendy Davis

bySouthern Coalition For Social Justice
in News, Nonprofit, Politics
0
ADVERTISEMENT
Share on FacebookShare on TwitterShare on LinkedinShare on PinterestShare via EmailShare on Reddit

Two weeks ago, Wendy Davis in her pink sneakers stood 11 hours in her efforts to filibuster an anti-abortion bill that will affect the ability of women across the state to make sound economic and health decisions regarding their bodies. Despite the efforts of Wendy Davis who has empowered women across the state and the nation, pundits believe this legislation is likely to become law. However, Cecil Richards, President of Planned Parenthood, says it’s too early to give up hope. Richards has been instrumental in organizing the massive protest by Texas women.

Wendy Davis was catapulted into celebrity status as a result of the social media frenzy tweeting the #standwithwendy hashtag in support of her efforts. If it was left up to redistricting efforts by the opposing party, Wendy Davis may have lost her senate. 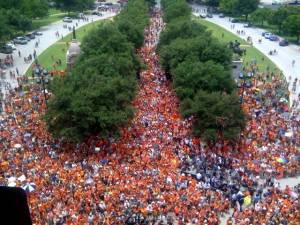 How Did A North Carolina-based Nonprofit help Wendy Davis keep her seat in the Texas Senate?

The Southern Coalition for Social Justice is a legal advocacy nonprofit that partners with communities of color and economically disadvantaged communities in the south to defend and advance their political, social, and economic rights through the combination of legal advocacy, research, organizing, and communications. One of SCSJ’s major focus areas is voting rights, and over the past five years they have been involved in major voting matters across the southern U.S. including many redistricting cases.

One of SCSJ’s redistricting cases made a real difference in the lives of women across the State of Texas. SCSJ represents the Texas NAACP in redistricting litigation that, among other things, successfully kept Texas from fragmenting the minority populations in Texas Senate District 10, the district that elects Senator Wendy Davis.  Senator Davis is white, but election results demonstrate conclusively that she is the candidate of choice of voters of color in that district.

Senator Davis stood on her feet for over 10 hours, filibustering one of the most stringent abortion bills in the country.  A bill that would have shut down nearly every clinic in Texas that offered abortions.  She could not sit, drink, eat, or use the restroom.  She couldn’t lean against the podium. And she prevailed. The Texas legislature may overturn her victory in the future, but for now, the women of Texas are safe. The redistricting battles that SCSJ fights produce real victories all the time, but this one was special. As a result of SCSJ’s redistricting litigation, Texas voters were able to keep electing a fierce champion for women’s rights.

For more information on the Southern Coalition for Social Justice and how you can help support, please contact at [email protected] or follow at https://twitter.com/scsj

The Southern Coalition for Social Justice is a Social Work Helper Contributor. SCSJ partners with communities of color and economically disadvantaged communities in the south to defend and advance their political, social and economic rights through the combination of legal advocacy, research, organizing and communications.