byDeona Hooper, MSW
in Disability, Education, Technology
0
ADVERTISEMENT
Share on FacebookShare on TwitterShare on LinkedinShare on PinterestShare via EmailShare on Reddit 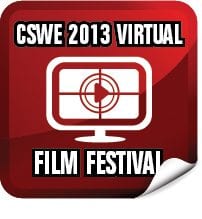 The Council on Social Work Education (CSWE) is taking measures to incorporate new technologies with social work education. Has your professor ever showed a relevant video on the material you are studying, but everyone in the video is wearing bell bottoms or looked like that 70’s show? Well, CSWE realizes that the instructional aids for social work education must be updated in order to resonate with students of a modern era.

The Virtual Film Festival was created to allow film makers or fellow Youtube enthusiasts to create and submit videos to help aspiring social workers understand the challenges and barriers vulnerable populations are facing. I was fortunate enough to be one of the judges who helped narrow down the films selected for this year’s festival, and it was a tough job considering all of the great entries. I was amazed at the broad range of social justice issues and populations these films sought to advocate or bring about awareness.

Beginning August 1 to September 15th 2013, Social Work Helper will be doing a weekly series of articles and Live Twitter Chats in conjunction with CSWE on the film makers and the social justice issues addressed in their films. I had the pleasure to interview Elizabeth Foxwell with the Council on Social Work Education in order to get a better understanding of their mission and vision for incorporating new technologies into social work education. Here is our interview:

DH:  What is the Council for Social Work Education, and could you define its purpose and scope?

CSWE: The Council on Social Work Education (CSWE) is a nonprofit national association representing more than 2,500 individual members, as well as more than 700 graduate and undergraduate programs of professional social work education. Founded in 1952, it is a partnership of educational and professional institutions, social welfare agencies, and private citizens, and is recognized by the Council for Higher Education Accreditation as the sole accrediting agency for social work education in the United States. It works to strengthen the profession of social work through advocacy, research, career advancement, and education.

DH: How did the concept for the CSWE Virtual Film Festival develop?

CSWE: For several years, the CSWE Gero-Ed Center sponsored a festival of aging-related films at the CSWE Annual Program Meeting (APM). It showed steady growth in interest and attendance. CSWE has a long-standing interest in postsecondary curriculum resources for social work education, and it was thought that a film festival at the APM encompassing the many areas of social work might be beneficial by showcasing films that could be valuable classroom tools for social work educators. Students, too, are keenly interested in multimedia as a medium and as a way of understanding issues in the field and the future clients they will serve. Adding a Virtual Film Festival was envisioned as a way to showcase student work in this area, as well as provide an expanded and flexible venue for participation by filmmakers, educators, students, and other members of the social work community.

DH: What is the vision for the CSWE Film Festivals, and how do you hope they will impact social work education?

CSWE: Many worthy films often do not register with the social work community because of a lack of funding for dissemination or a lack of awareness by filmmakers about the usefulness of their work to social work educators and students. CSWE believes it can play a valuable role in connecting filmmakers’ work to the social work classroom, whether the latter is a bricks-and-mortar version or a virtual one. One such outcome is CSWE’s free study guides for films featured in the CSWE film festivals. As the festivals have progressed, it has become more evident that members are interested in not only the use of films in their classrooms but also the production of multimedia as class projects and as a contribution to social work dialogue and research. CSWE hopes to foster these initiatives and discussion among filmmakers, educators, students, and social service professionals.

DH: What type of issues are this year’s Virtual Film Festival entrants addressing?

CSWE: We have seen a strong interest in social justice concerns such as the needs of immigrants and refugees, as well as the lesbian, gay, bisexual, and transgender community. Sexual abuse is discussed in two films, including one on domestic sex trafficking. The film selection also shows the continuing importance of disability, mental health, and diversity issues to filmmakers and our audience. We are pleased to have a participant from Ethiopia and his film on cross-cultural adoption.

DH: What is the submission process for the CSWE 2014 Film Festivals, and who can make submissions?

CSWE: Currently screeners are reviewing the submissions for the CSWE 2013 Film Festival, which will be held October 31–November 3, 2013, at CSWE’s 59th APM in Dallas, Texas. We hope to announce the Official Selection by late July.

It is anticipated that submissions for the next Virtual Film Festival will open in early February 2014, with a 6-week period for submission. Eligible films will be those made by current or newly graduated students that were produced after September 1, 2012. We welcome films pertaining to the entire spectrum of social work education, with particular interest in aging, mental health, and subjects that involve military and diverse populations.

DH: The Virtual Film Festival is a smart way of incorporating current technology such as YouTube into social work education by allowing students to produce content for possible classroom use under CSWE approval. What other ways do you plan to infuse new technologies?

CSWE: We are looking forward to dialogue during the 2013 Virtual Film Festival via the Google Community CSWE Film Festivals and twitter chats involving the filmmakers, social work educators, social work students, and the wider community of social service professionals. CSWE also has started a blog, Moving Pictures, on multimedia pertaining to social work.

We continue to explore ways to call attention to multimedia useful to social work educators, whether it is highlighting on the CSWE Twitter feed a film clip of FDR’s speech on the enactment of the Social Security Act, providing clips from CSWE’s 1959 recruitment film Summer of Decision starring Kevin McCarthy and Suzanne Pleshette, or mentioning the BackStory radio program’s look at the history of mental health treatment in the United States. Social work educators can use new media in many creative and exciting ways, and CSWE will continue to assist them as they apply innovative teaching methods.

Here is one example of the videos selected for the festival. This video was created by MSW student Bianca Morris: