byVilissa Thompson
in Criminal Justice, Disability, News
0
ADVERTISEMENT
Share on FacebookShare on TwitterShare on LinkedinShare on PinterestShare via EmailShare on Reddit

Delta Airlines is being sued on allegations of mistreating a disabled passenger by not providing reasonable accommodations for him to board and exit the plane.  Baraka Kanaan, a man who became disabled in 2000 after sustaining severe spinal injuries from a car accident, filed a lawsuit in the U.S. District Court of Hawaii last week.  The lawsuit states that he was “‘forced to crawl across an airport tarmac, up and down the stairs of an airplane, down the aisle of the aircraft and out of and into his seat’ on a series of flights between Massachusetts and Hawaii July 2012.”  Mr. Kanaan claims that he had endured such treatment not once, but twice, while flying with Delta Airlines.  Mr. Kanaan alleges that the flight attendants did not offer to assist him in any way as he painstakingly made his way across the tarmac.  The only assistance those at Delta offered Mr. Kanaan was a piece of cardboard he could sit on that would keep his clothes from becoming filthy.

If Mr. Kanaan claims are proven to be true, then Delta Airlines would be in direct violation of the Air Carrier Access Act (ACAA) of 1986 and section 504 of the Rehabilitation Act of 1973.  These pieces of legislation requires airports and air carriers to “provide boarding assistance to individuals with disabilities by using ramps, mechanical lifts, or other suitable devices where level-entry boarding by loading bridge or mobile lounge is not available on any aircraft with a seating capacity of 31 or more passengers.” 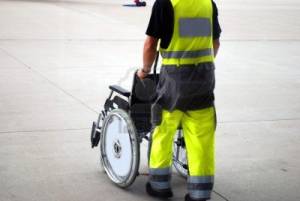 As there are more than 50 million Americans with disabilities in the United States who could use this mode of transportation as a desirable option, such allegations against a major airline carrier are incredibly disturbing, humiliating, and dehumanizing.  Those with disabilities are accustomed to being “creative”  when faced with accessibility issues while travelling, whether on land or by air, but such actions of insensitivity and ill-preparedness by a major corporation like Delta Airlines are inexcusable.  As those at Delta watched Mr. Kanaan crawl on the tarmac in refusal to assist him because of a “liability” issue, Delta had a responsibility and liability to provide accommodations to Mr. Kanaan so that he could board and exit the plane by means that were appropriate to his medical condition and physical functioning.  This gross inaction and insensitivity are not simple “oversights;” they are prime examples of how ableism exists when it comes to people with disabilities living their lives and needing reasonable accommodations to do simple tasks such as making their way across the tarmac.  Mr. Kanaan’s case may be one of a handful to make it to a U.S. District Court, but people with disabilities encounter “liability” perceptions and lack of reasonable accommodations everyday in our country.

I plan to follow this case as it makes its way through the federal court system, and I will keep Social Work Helper’s readers informed of new developments as they are made public.