byDeona Hooper, MSW
in Education, Social Work Chats
0
ADVERTISEMENT
Share on FacebookShare on TwitterShare on LinkedinShare on PinterestShare via EmailShare on Reddit 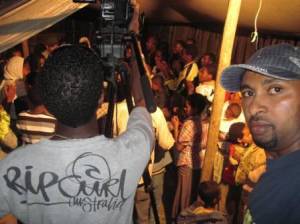 I had the opportunity to interview Moges Tafesse the film director of “A Season for Dancing” which documents a father’s journey in helping his adopted child connect with his heritage. “A Season for Dancing” has been nominated as one of the finalist in the Council for Social Work Education (CSWE) Virtual Film Festival. Moges describes the film as journey “toward personal healing, the restoration of relationships with family and childhood friends, the redemption of his cultural identity, and his first steps toward achieving his dreams for the future.”

The debate over interracial adoptions has been a difficult one within our country’s history and within the social work profession. The major concerns relating to interracial adoptions have always been whether the adoptive parent would have the ability to be culturally sensitive to the perspective adoptee’s racial and cultural identity. In 1972, the National Association for Black Social Workers  raised concerns about African-American children being adopted into Caucasian homes based on circumstances where both Black and Indian children were being acquired as laborers for the home.

When I started working in child welfare, one of the first films I viewed was of Richard Cardinal who was an Indian child removed from his reservation and placed into foster care with 18 different Caucasian families. Unfortunately before his 18 birthday, Richard committed suicide, but he left behind a diary that gave valuable insights into a broken child welfare system. I believe that it is important for us to learn about Richard’s story to prevent making the same mistakes, but it is also important to look at successful models of interracial adoptions in order to learn how to educate and develop programs for perspective interracial adoptive parents.

Now, I want to share with you my Mogese Tafasse’s thoughts on “A Season for Dancing”.

SWH: Can you tell SWH Readers about your background, and your film making role?

I acquired both a MSW and PhD in Social Work and Social Development. As the director/writer of this film, I consider myself to be a socially responsible film maker in Ethiopia while running a small production firm engaged in the production of short films, documentaries, and TV programs.  Previously, I worked in a adoption organization that connects Ethiopian children with families in France, and I observed the plight of adoptees who were disconnected to their  family, culture and language. I observed children coming back to Ethiopia to see their family and culture, but they ended up desperate and aliens. During my MSW and PhD courses-Practice with Children and Families, and Action Research, I sensed the gravity of the issue of inter-country adoption and thinking  of an opportunity to make one short documentary film on adoption with the principles of action research as an approach for my documentary films-to bring a change while filming.

SWH: What attracted you to the CSWE Virtual Film Festival, and what are your thoughts on your film possible influencing the education of future social workers and current practitioners in providing services to vulnerable populations?

MT: A professor of Emeritus, Nathan Linsk, from Jane Addams college of social work at University of Illinois, Chicago, advised me to submit my documentary for CSWE. He knows my interest in media and social work. On the issues I raised on the film, I believe the film can influence social work education and practice by putting the famous social work approach-person in environment in an Ethiopian context and making it more practical and tangible.  Following a person- in- environment approach as opposed to person in problem or pathogenic approach, the film show that the psycho-social, biological and spiritual aspects to be considered during social work intervention.

The lead character before returning to Ethiopia had a negative experience. When he come back to Ethiopia he confronts all those hidden part of his life and make meaning out of it and reconnected his background, then went to his place with a healed personality.  What is interesting to me in this documentary is also after we done the research we highly participate the lead character to the level of assistant director in a way the film story match with the findings of the study.  in a sense it is participatory video that we see a challenges and solution of an adopted child form his own perspective but that is related with a prominent social work model of intervention.

SWH: What would you like to accomplish with your film making, and what advice would you give to aspiring film makers who want to tell other’s stories?

MT: Currently I am running an independent production firm, Synergy Habesha Films and Communications (www.synergyhabeshafilms.com). As a social worker studied at PhD level I am bringing my social work knowledge with media as a tool.  I have great aspiration to produce more films on diverse issues on vulnerable part of Ethiopian community particularly women and children. I have also an aspiration to make feature documentary film. Currently I am writing a script about an Ethiopian women who was sold as a slave concubine for an Atomoan Arab, who was rescued by her mate after 15 years of search (The Concubine).  My advise for others who would like to make films is to do a research on the subject matter and the approach of the film to be used to frame the subject matter. During production valuing the participants to a level that they are story tellers and the film makers is a learner/listener is also a great way to find great stories from the character. Last but not least is determination and persistence and believing in once’s contribution is very important.

Join us for a Live Twitter Chat on August 8, 2013 at 8PM EST with Film Director Moges Talfese to discuss his film and thoughts on interracial adoptions. @swhelpercom will be moderating the chat using the hashtag #swunited.

View “A Season for Dancing” below:

The Standards of Self-Care (Part 1 of 3)