Racial Profiling Is Alive And Well In The United States

byKimberly Diego
in Criminal Justice, Human Rights, News
0
ADVERTISEMENT
Share on FacebookShare on TwitterShare on LinkedinShare on PinterestShare via EmailShare on Reddit 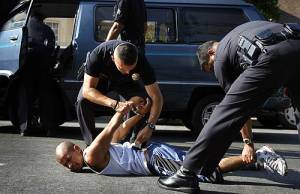 The George Zimmerman trial is one of the most hotly contested issues in the country today, with large portions of citizens contesting what they see as an unjust, racially motivated acquittal of a heartless killer. Others, however, agree with the jury and believe that Zimmerman was merely acting in self-defense, albeit over-aggressively. No matter what your views on the Zimmerman trial, criminal defense lawyers know perhaps better than anyone that racial profiling is still a huge problem in our country.

“Surely not,” you may say. “We are a progressive country. We’re tolerant, and we have a minority President.” Well, sure we’ve come a long way, but black men and women still make up a disproportionately large number of convicted criminals in this country. Earlier this week, New York City’s stop and frisk policy was determined to be racial profiling of minorities and found unconstitutional by a federal judge. According to CNN, Federal Judge Shira A. Scheindlin was quoted from her ruling in the class action lawsuit:

“The city’s highest officials have turned a blind eye to the evidence that officers are conducting stops in a racially discriminatory manner,” Scheindlin wrote. “In their zeal to defend a policy that they believe to be effective, they have willfully ignored overwhelming proof that the policy of targeting ‘the right people’ is racially discriminatory and therefore violates the United States Constitution.” Read Full Article

Need more convincing? Check out the evidence presented in Michelle Alexander’s new book, The New Jim Crow: Mass Incarceration in the Age of Colorblindness. Alexander, a law professor at Ohio State University, claims that today there are more black men in prison or on probation or parole than there were male slaves just prior to the Civil War. The U.S. Bureau of Justice reports that there were 846,000 black men arrested in 2008, and the U.S. census shows that while African-Americans make up 13.6% of the population, 40.2% of all prison inmates are black males.

ColorLine puts it another way:  In 2005, for every 100,000 arrests in the U.S., 2,290 people were black, while 412 were white. Alexander claims that even though crime rates have greatly dropped in the last few years, the number of black men in prison has soared.

Perhaps even worse than the initial incarceration is the high rate of black men who return to prison. Again, ColorLines reports that within three years, 78% of black men will be back in prison, versus 69% of white men. Bill Quigley, the Legal Director for the Center for Constitutional Rights, attributes this largely to the fact that it is exceedingly difficult to get a job after a criminal conviction. Another shocking statistic from ColorLines reports that only 5% of black men with a criminal record get a callback when applying for a job. In contrast, 17% of white men with a criminal background get a callback – a low number but a great deal better than the percentage of African-Americans. Alexander posits that the disproportionately large number of black men in prison, coupled with the difficulty ex-convicts have in getting a job, has essentially created a new group of black men without citizenship—a cultural phenomenon that’s remarkably similar to the state of society in antebellum America. In fact, today there are more black men prohibited from voting due to a criminal conviction than there were black men prohibited from voting in 1870.

Is there any one issue that can be identified as the core of the racial profiling problem? Actually, yes, says Alexander. The War on Drugs specifically targets poor minority communities, putting more black men behind bars than any other issue. A group of Christian pastors recently met in Nashville to call an end to the War on Drugs and what they see as racial discrimination. They stated that African-Americans comprise 13% of the U.S. population and 13% of drug users. Despite their minority status, 38% of drug related arrests and 59% of drug convictions are of black men.

There is no doubt that the George Zimmerman trial is a complicated issue, and both sides have legitimate points to make. But when you understand the full extent of the racial discrimination that still exists in our country, you can understand why there is such outrage over the verdict.

ID’s for All: A New Greensboro North Carolina Initiative

Kimberly Diego is a criminal defense attorney in Denver practicing at The Law Office of Kimberly Diego. She obtained her undergraduate degree from Georgetown University and her law degree at University of Colorado. She was named one of Super Lawyers’ “Rising Stars of 2012” and “Top 100 Trial Lawyers in Colorado” for 2012 and 2013 by The National Trial Lawyers. Both honors are limited to a small percentage of practicing attorneys in each state.  She has also been recognized for her work in domestic violence cases.