byJeffrey Lee
in Education, News, Politics
0
ADVERTISEMENT
Share on FacebookShare on TwitterShare on LinkedinShare on PinterestShare via EmailShare on Reddit 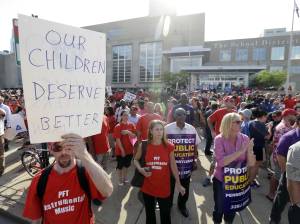 Take a ride down any North Philadelphia street and you will see children playing outside enjoying in what they perceive to be the last days of their summer vacation. Superintendent Hite threatened not to reopen schools if he did not receives $50 million from the city by Aug. 16 th schools which started a sparing match with city officials as to how they could raise the funds for schools before the deadline.

The Philadelphia School District has been no stranger to financial difficulty.  Last year, the district came up with a plan to shutter some 64 schools by the year 2017, of which 23 of those schools were closed at the end of the 2012-2013 school year.  This so-called cost cutting measure seems to have only put a coin donation in the endless bucket of Philadelphia School District debt.  The district ended the school year in the red for more than $300 million and has been scrambling ever since to try and fill the gap.  It seems that all of the districts cost cutting ideas and pleas to Harrisburg have been failed missions not to mention the removal of over 3000 district employees.

As a former Philadelphia school district teacher whose school was closed in 2012 this scenario seems to familiar.  The district executes closures, teachers are laid off, students are shuffled from school to school, while city and district administrations payroll continues to go unaffected. This school finance issue has to be attacked from a completely different angle, and the city can no longer depend on funds from Harrisburg to fund Philadelphia schools under  Gov. Corbett’s Republican regime.

The city must take alternate action to solve this issue the same way they took action to remove former Superintendent, Arlene Ackerman, who was paid close to $1 million dollars to leave the district with the help of private funds.  The city also seems to have disposable income to beautify city halls “lawn” at Dilworth Plaza at an astounding $70 million price tag, but cannot figure out how to adequately fund city schools.  It seems that Mayor Nutter needs to reach out to the same deep pocket friends he used then, to make sure schools are not only opened, but also opened adequately.  After all, the $50 million is just enough to fund what Superintendent Hite is calling a “bare bones” budget, which does not include Assistant Principals, Noon-Time Aides, or other necessary school personnel not to mention simple necessities like books and other school supplies.

In the end, the students of the Philadelphia School District are the ones who educational futures are being played out before them with no input of their own.  Some students were already entering school buildings that were in some cases unfit for occupation with leaking ceilings and heating/cooling equipment that worked part-time at best.  These students will continue to suffer until someone in power takes responsibility for their actions and creates a school funding plan that pays the ransom, and at the same time creates a fairer system.

The city of Philadelphia will borrow $50 million in the capital market for its cash-strapped public schools so they can rehire about 1,000 furloughed employees and open on time on Sept. 9, Mayor Michael Nutter said on Thursday.

The pledge for stopgap funding for the school district, which has about 140,000 students, came a day before a deadline laid out by Superintendent William Hite. He warned last week that without the additional money from the city, the district’s ongoing financial crisis would threaten his ability to open schools on time and safely.

Nutter said he would direct city financial officers to immediately lay the groundwork to borrow $50 million on behalf of the school district.

The city plans to sell municipal bonds, borrowing money from investors for the four-year loan. The structure of the bond deal and other details had not yet been worked out, according to Nutter spokesman Mark McDonald.  Read Full Article