bySWHELPER
in LGBTQ, News, Social Work
0
ADVERTISEMENT
Share on FacebookShare on TwitterShare on LinkedinShare on PinterestShare via EmailShare on Reddit
REV. AL SHARPTON & MARTIN LUTHER KING, III, TO BE JOINED BY CONGRESSMAN JOHN LEWIS (LAST LIVING CONVENER OF 1963 MARCH ON WASHINGTON), HOUSE DEMOCRATIC LEADER NANCY PELOSI, DEMOCRATIC WHIP STENY HOYER, THE FAMILIES OF EMMETT TILL, & TRAYVON MARTIN, & LEADERS FROM CIVIL RIGHTS, THE CHURCH, LABOR & WOMEN’S GROUPS, IMMIGRATION ADVOCATES, THE LGBT COMMUNITY & MORE FOR THE NATIONAL ACTION TO REALIZE THE DREAM MARCH SATURDAY, AUGUST 24
(Washington, DC)–Reverend Al Sharpton, President of National Action Network (NAN), and Martin Luther King, III, President of Realize the Dream, and the eldest son of Dr. Martin Luther King, Jr., have announced that fifty-years-after Dr. King delivered his historic “I Have a Dream” speech at the March on Washington in 1963, they will mount the same steps at the Lincoln Memorial to lead the 50th Anniversary March on Washington National Action to Realize the Dream on Saturday, August 24, 2013. Joining them will be a cross-sector of speakers ranging from House Democratic Leader Nancy Pelosi to the family of Trayvon Martin.

In light of the recent Supreme Court ruling negating a key section of the Voting Rights Act, the ruling in the George Zimmerman case, and other current and crucial civil rights issues, march organizers will push for immediate action from Congress. Jobs in the black community are stuck at over 13 percent and there must be pressure applied to Congress to create jobs. With questions in the criminal justice system in the national spotlight, from Stop and Frisk police tactics in New York, to Stand Your Ground laws in Florida, there is a real concern about the state of Blacks in the justice system. There must be a mandate that 50-years after fighting some of the same battles, there must be a continuation march not a commemoration march.

Joined by an alliance of prominent advocates of labor, health, housing, education, media, and civil and human rights, the purpose of the march is not just to celebrate the historic 1963 March on Washington, but to galvanize the American people around the compelling issues of today including women’s issues, immigration, workers’ rights, LGBT equality, among others. Congressman John Lewis, the only one of the six leaders of the March on Washington of 1963 that is still alive has agreed to stand with Rev. Al Sharpton, Martin Luther King, III and thousands of others at the historic event.

Speakers will be listed on theNational Action Network website in the near future (www.nationalactionnetwork.net)

According to Rev. Sharpton and Martin Luther King, III, many Americans including those who have faced a history of exclusion—people of color, poor whites, women, workers, immigrants, LGBT’s—are still disproportionately represented in many negative socioeconomic categories like poverty, poor education, unemployment, underemployment, loss of labor rights, inadequate health care, unfairness in the justice system and voter suppression. “It is the intent of those that come together to make it clear that this is not just a nostalgia visit, that this is not a commemoration but a continuation and a call to action,” said the Rev. Al Sharpton. “We are in a climate that is threatening too much of what was achieved 50 years ago.” 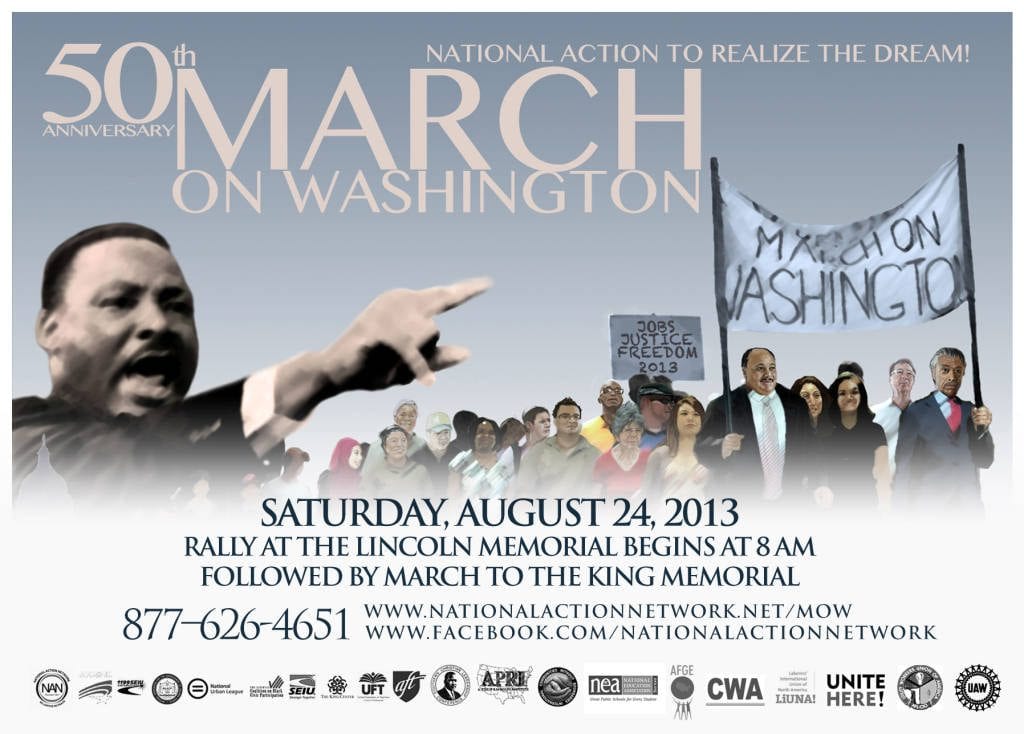