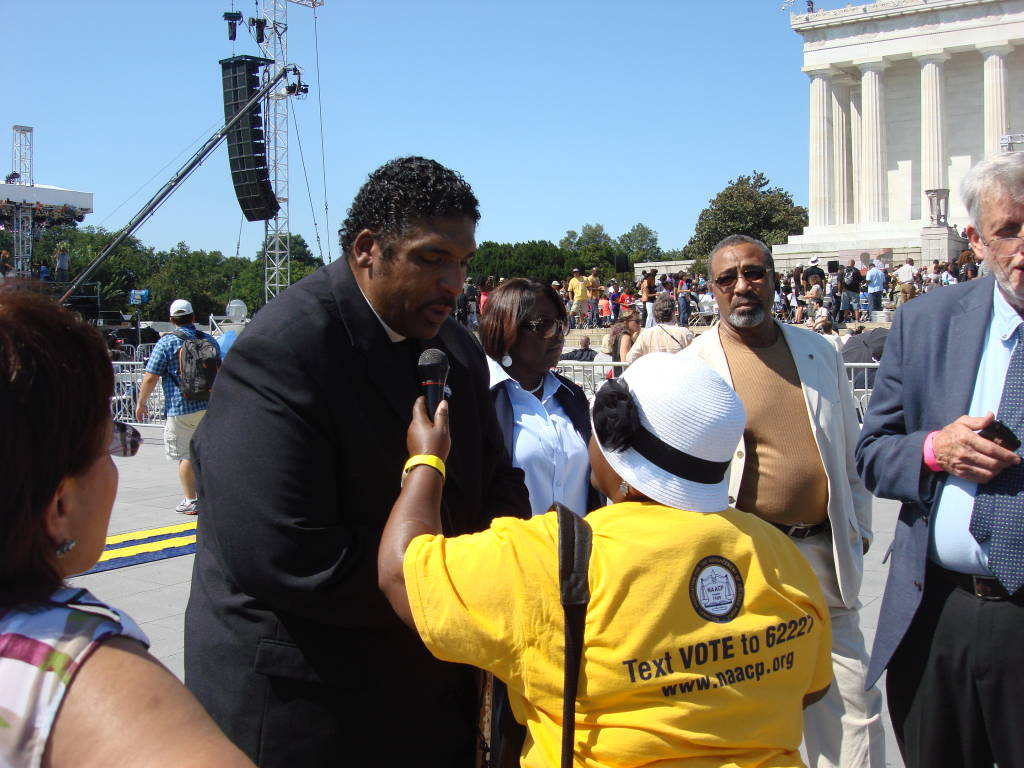 NC NAACP President, William Barber III, was a speaker at the August 24th March on Washington hosted by Reverend Al Sharpton and the National Action Network (NAN). I finally was able to catch up with Reverend Barber even though I had to go to Washington, DC to do it. Reverend Barber has been the catalyst in organizing Moral Monday protest, and since the North Carolina General Assemble is not in session, he has been taking Moral Monday Protest on the road.

Moral Monday protest have been planned for 13 cities all around the state to help organizer create awareness and unity on the multitude of issues facing North Carolinians. I had the opportunity to ask Reverend Barber about the Republican Board of Election in Elizabeth City possibly setting a precedent that will prevent college students in campus housing from voting.

Reverend Barber said, “It’s Wrong…It’s wrong! Whatever they do that violates people constitutional rights, they will be filling lawsuits to seek redress in the court.” For more information on the 13 city Moral Monday tour, you can visit the NC NAACP website at www.naacpnc.org.

However, Reverend Barber is on a different mission today as he provides the key note speech supporting a state-wide strike by fast food workers.  According to the NC NAACP Facebook Event Page:

Rev. Dr. William J. Barber, II will be giving the keynote speech at the Fast Food Workers Strike for Good Jobs and Freedom on August 29th. Workers from over 60 fast food restaurants across the state will go on strike on the 29th to demand a living wage. No one can survive on $7.25/hr.

Dr. Barber and the NC NAACP stand in solidarity with these courageous fast food workers and we call on the Forward Together Movement to join us. We will gather at Martin St. Baptist Church at 1001 E. Martin St. in Raleigh at 3:30 and march together through downtown Raleigh. Dr. Barber will speak following the march.

Hate Movements by Neighbors Against People With Disabilities

Hate Movements by Neighbors Against People With Disabilities

The Importance of Social Work and Politics: A Social Worker's Call to Arms