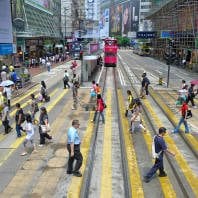 Each time I have a conversation with a social worker or social work educator, the narrative tends to sound the same no matter where they are located. In Hong Kong and Mainland China, social work is one of the fastest growing professions.

When I was working in Child Protective Services, an Asian film company came to my agency to document practices in the United States. It appears they were looking at the US model for possible implementation in their country, and this made me more curious about what social work looks like in Asia.

According to the Wall Street Journal:

Hong Kong has become a more unequal city over the past decade, according to new government figures. The city’s wealth gap now outstrips that of Singapore, the United Kingdom and Australia as well as other major cities notorious for inequality such as Washington and New York City, says the Hong Kong’s Census and Statistics Department. In 2011, the city’s Gini coefficient—an index from 0 to 1 that measures the wealth gap—rose to 0.537, up from 0.525 in 2001. It’s a figure that exceeds various estimates even of inequality across the border in mainland China. Read Full Article

SWH: Can you tell us about your background, and what led you to choose social work as a profession?

Terry: I started my career as a social worker in Hong Kong in the 1980s. At that time, Hong Kong was still a British colony, enjoying rapid economic growth that allowed great stride in welfare service development. When I was fresh from college, social work was attractive to me as a relatively new profession. It promised the opportunity for new and creative ventures for meeting the changing social needs. I worked with young people in Hong Kong for twenty years before I started my second career as a social work academia. I am now teaching Social Work in the Chinese University of Hong Kong.

SWH: What is the mission and role of social work in your country, and how are social workers utilized?

Terry: A note is necessary when talking about social work in my country. Hong Kong is a special administrative region of China under the principle of “one country two systems”, after the return of its sovereignty to China in 1997. Social work in Hong Kong has started its development since the 1970s with the support of the colonial government. In Mainland China, social work was accepted as an academic discipline in the 1980s, and recognized as a profession only in recent years. Given the different legacy and dissimilar socio-political circumstance between the regions, the mission and role of social work in Hong Kong is not exactly the same as that in the rest of China.

SWH: What are some of the similarities and differences of social work education in Hong Kong from the Western World?

SWH: Who are some of the social work pioneers that have helped shape social work in your country from its conception to present day?

SWH: What are some of the current challenges and barriers social workers in your country face, and what are your hopes for the future as the profession continues to evolve?

Terry: There are invariably a lot of challenges that social workers in Hong Kong and Mainland China have to face. To name just a few, we are encountering rapid social changes with an ageing population, changing family structure, and increased exclusion of the marginalized population from social and economic participation. Social workers have to be strategic and creative in order to deal with these challenges.

Meanwhile, in the current encroachment by managerialism, social workers are pressurized by the increasing demand for quantitative outputs, which often diverts their energy from quality intervention to the pursuit of numbers. Apart from the challenge of rapid social change and pressure for outputs, social workers in Mainland China also have particular challenge in the novelty of social work as a profession. It has yet to gain recognition from the general public and to negotiate for its occupational mandate with the bureaucracies. Despite all that, I think the social work community in Hong Kong and Mainland China is vibrant enough to confront the challenges.