byMeredith McMonigle
in Criminal Justice, Local, News
0
ADVERTISEMENT
Share on FacebookShare on TwitterShare on LinkedinShare on PinterestShare via EmailShare on Reddit 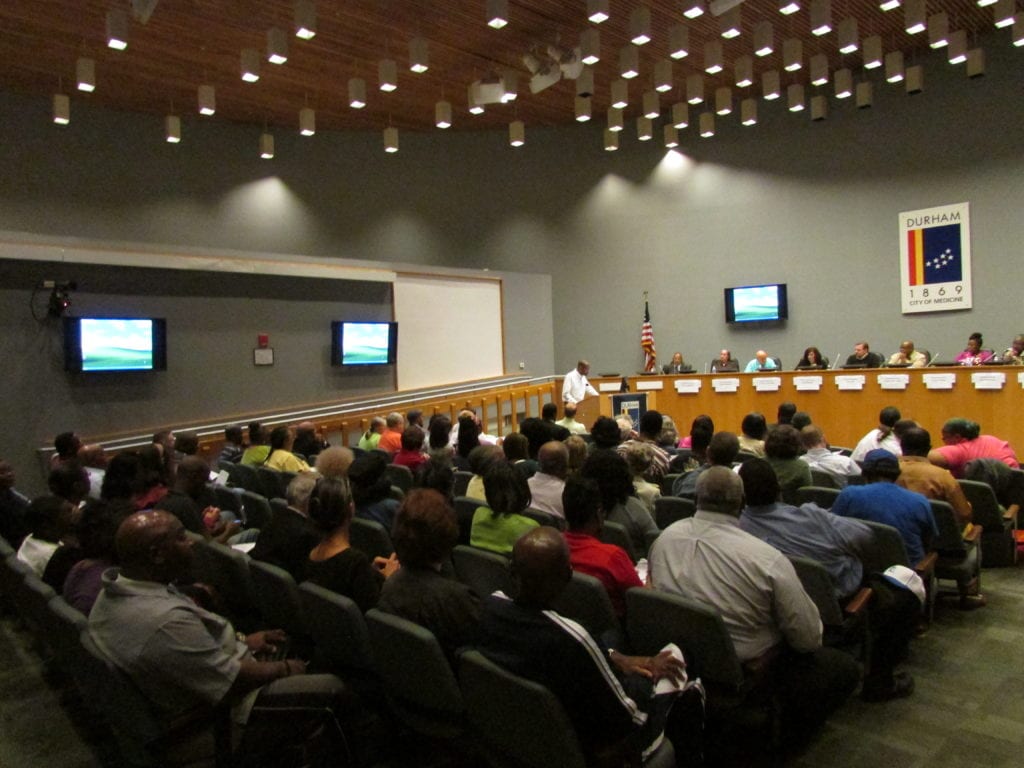 In response to the community activist group Fostering Alternative Enforcement Action (FADE) ongoing efforts to expose troubling reports of racial disparities and bias by the Durham Police Department, Mayor Bell convened the Human Relations Commission on Tuesday October 1, 2013 to hear from the community.

As the meeting commenced, there was a palpable sense of urgency and somberness among the packed audience. In a orderly and quiet manner, a steady stream of community members, eighteen in all, came before the Commission to speak. They were an impressive cross-section of Durham—old and young, black and white, the primly and casually dressed, all united by a desire to make the community they love work better for all people.

With three minutes to address the 15-member Commission, speeches ranged from those highlighting SCSJ’s recent Durham PD Racial Profiling data to emotional pleas regarding the perilous state of young black men in Durham. One white pastor talked of “two Durhams”, one where he was able to do drugs freely as a Duke undergrad and another where a black neighbor was unable to get police to respond in a timely matter to a missing child report.

When he called on her behalf, the police promptly responded. This combination of data and personal stories of ill treatment at the hands of law enforcement was a potent mix. While Commissioners asked no questions and made no comments, it is hard to imagine they could have sat through the testimony and not been deeply moved and alarmed. At one point, one speaker addressed the Commissioners directly, rhetorically stating that all of the African American members knew what he was talking about, that they had either experienced police mistreatment because of their skin color or knew someone that had.

As the meeting came to a close, the Chair of the Commission informed the audience that members would now take time to review written and oral testimony and data reports, conducting further research as needed. Ultimately, the Chair said, the Commission would make recommendations to City Council regarding the issues raised at the hearing. When it become apparent that there would be no further comment from Commissioners, an audience member haltingly shouted out, “Will we know what recommendations you make?” The Chair responded formally and somewhat unconvincingly, “You will know.”

Want to get involved? You can visit the FADE Facebook page to learn more and attend the group’s next meeting. You can also email [email protected] to join SCSJ’s Criminal Justice Reform Initiative email list and receive regular updates.

Responding to the Bereaved: To Be and To Do When Dealing With Bereavment

Meredith McMonigle is a macro social work intern with the Southern Coalition of Social Justice in Durham, NC. SCSJ partners with communities of color and economically disadvantaged communities in the south to defend and advance their political, social and economic rights through the combination of legal advocacy, research, organizing and communications.

Responding to the Bereaved: To Be and To Do When Dealing With Bereavment

Important Factors to Consider While Migrating Your Web Host Provider