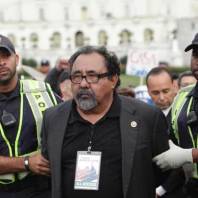 With the government shutdown, gun control, and the roll out of Obamacare, immigration reform appears to have taken a back seat on the minds of lawmakers. What was once thought to be a foregone conclusion after the 2012 Presidential Election, many Americans believed immigration reform would receive a swift passage into law. Unfortunately, House Republicans have continued to use stall tactics, investigative committees, and prevention of a vote to keep pending immigration reform legislation from becoming law. On October 8, 2013, approximately 10,000 protesters ascended on the US Capitol to demand immigration reform which resulted in several dozen arrest that included 8 members of Congress.

According to MSNBC News,

The rally, organized by a coalition of immigrant rights groups and labor unions, featured speeches from dozens of politicians. Among the speakers was Nancy Pelosi, who recently joined Democratic members in introducing a new comprehensive immigration bill modeled on the Senate’s already-passed proposal. Many attendees carried signs or chanted slogans encouraging the House to hold a vote on the bipartisan Senate bill, which would have provided an earned path to citizenship for some undocumented immigrants over a 13 year period.  Read Full Article

https://twitter.com/repjohnlewis/status/387686060446076928/
On October 5, 2013, a National Day of Dignity was held in cities around the country with immigrant communities, faith leaders, labor organizations and more. The rallies were held to call on Congress to pass comprehensive immigration reform now. Republicans promised to work with Democrats in order to create a plan for comprehensive immigration reform. The Senate did its job and passed a bill that wasn’t perfect. However, it was a start towards removing barriers for some like the Dreamers who are caught in an undocumented limbo.

We are marching for commonsense immigration reform with legalization that leads to citizenship, legal immigration rules that promote family unity and protect worker rights, an end to the destruction of our families through deportations, and a halt to the rush towards massive wasteful spending on unneeded border militarization and for profit immigrant detention prisons.

We are marching for an America where our hard work is honored; where our many contributions to the nation are respected and where our families and children can dream of building lives of dignity and without fear. We cannot let the continued failures of Washington result in more families torn apart, more abusive employers and poverty wages, more children who cannot dream. October Immigration