byVilissa Thompson
in Disability, Education
0
ADVERTISEMENT
Share on FacebookShare on TwitterShare on LinkedinShare on PinterestShare via EmailShare on Reddit

On September 30, 2013, President Barack Obama issued a proclamation declaring October 2013 as National Disability Employment Awareness Month.  In his proclamation, the President urged employers and those in hiring positions to seek out individuals with disabilities to participate in our workforce and contribute their unique gifts and talents to our society.

At the time of the article, the figures for September 2013 have not been updated onto the Department’s website due to the government shutdown. With people with disabilities making up such a small percentage of the workforce and yet a very high percentage of unemployment when compared to their able-bodied counterparts, this puts the population at an incredible disadvantage socially, financially, educationally, mentally, and hinders their ability to become independent members in society. 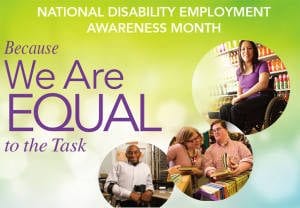 The observance of National Disability Employment Awareness Month shines a spotlight on the struggles people with disabilities endure in their journey to being viewed as desirable employing candidates.  There are many myths that hiring personnel and corporations have about hiring those with disabilities.

All of these myths are erroneous, yet they pervade the minds of hiring professionals who, either intentionally or unintentionally, doubt the potential of aspiring employable candidates who are disabled.

There are several organizations that exist to debunk the myths about hiring those with disabilities, and provide these employable individuals with a platform to showcase their skills and abilities.  One prominent campaign is the What Can You Do? campaign, an initiative that seeks to boost the employability of those with disabilities by encouraging organizations to recognize the many talents and values those within this group possesses, and the gains (especially financial) their organizations could reap by hiring these individuals.

DiversityInc has created two downloadable files that discusses the history of the disability employment observance, which began in 1945 by Congress, and was held for only a week.  During that time, it was called “National Employ the Physically Handicapped Week.”  In 1962, the observance was renamed to include individuals of all different abilities, not just those with physical limitations.

By 1988, the name of the observance was changed to “National Disability Employment Awareness Month,” and was expanded to a full month.  Educating society about the historical account of the observance, along with the statistics of employability among people with disabilities is imperative in knowing where we as a society have been successful in providing employment opportunities to those with disabilities, and where the remaining gaps are still prevalent.

If anyone is willing to answer any of the following questions, please contact me via email, [email protected]  I would love to hear why or why not your company has made hiring those with disabilities a priority.

Government Shutdown Is Over But What Does It Mean

Tell Your Story or Someone Else Will: Child Welfare’s PR Problem

Tell Your Story or Someone Else Will: Child Welfare's PR Problem