byVilissa Thompson
in Disability, Mental Health, News
0
ADVERTISEMENT
Share on FacebookShare on TwitterShare on LinkedinShare on PinterestShare via EmailShare on Reddit

Are police officers adequately trained to handle disturbances that involve individuals with mental illnesses?  News networks and social media have recently covered stories where those with cognitive and psychological challenges have been victimized, and sadly, murdered, by the hands of those who are supposed to protect and serve our communities.

The most recent story I read involved the death of a 26 year old man with Down’s Syndrome that took place in Maryland earlier this year.  Several news outlets reported that Robert Saylor, the young victim, was apprehended by police officers when he tried to reenter the movie theater without a ticket to view the Osama bin Laden raid movie, “Zero Dark Thirty.”  Three Frederick County deputies who were moonlighting as mall-security officers dragged the 294-pounds Saylor out of the cinema in handcuffs and restraints.

Witnesses at the incident heard Saylor’s distress calls when he was being removed from the theater.  In the midst of restraining Saylor, the officers allegedly managed to fracture his larynx, which significantly disrupted his ability to breath properly.  When the officers realized that Saylor was having difficulty breathing, they released him from the handcuffs and called for emergency personnel to arrive on the scene.  Unfortunately, the medical assistance came too late for Saylor; he apparently suffocated from the manhandling of the police officers.

The surprising part of the story is that Robert Saylor was not alone when he was at the movie theater.  He was accompanied by a full-time aide who informed the police officers that Saylor would panic if they were to touch him.  Saylor’s parents has taken legal action by filing a lawsuit against the three police officers, the theater’s parent company, the cinema’s property manager, and Frederick County.  The lawsuit is filed under the Americans with Disabilities Act.

This story has created several conversations about the kind of training police officers and other law enforcement personnel receive to appropriately handle disturbances involving those with mental illness.  The National Alliance on Mental Illness (NAMI) created a comprehensive training curriculum in its partnership with the University of Memphis.  The Crisis Intervention Training (CIT) Program is a 40-hours curriculum established to train police officers about mental health.  So far, 45 states, including the District of Columbia, have implemented this kind of training program.

Though there is a high number of states that recognize the program, there is a disparity in the availability of the program within counties in these states.  Only one or two counties actually provide training to their officers for the entire state, in some cases.  What has led to this lack of distribution is the fact that the program is not mandatory. Financial barriers in offering adequate training to those who would benefit has also played a major role in the lack of availability of programs like CIT. 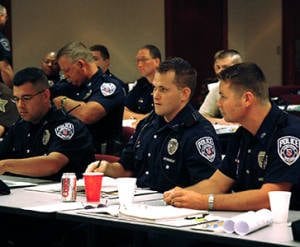 Cases like Saylor’s cannot become the norm in how law enforcement officers handle incidences where those with mental illness or cognitive disabilities may pose a danger of harming themselves or others.  Without properly equipping police officers with the knowledge and understanding regarding how to appropriately assess and respond to situations where special considerations are needed to protect the well-being of all parties, more unnecessary use of strong force and unintentional deaths will continue.  How many more victims must there be before we realize that training our police officers should be a high priority so that they can effectively do their jobs in our communities?

If you are wondering if your state is one of the 45 that offers CIT and similar mental illness training programs to officers, please review the CIT map offered by the University of Memphis.  Once you have selected your state, you will see the counties highlighted that offers this special training to its officers.  For example, when I checked the availability of the CIT program in South Carolina, I found that only two counties out of 46 offered the program (Greenville and Spartanburg counties).  Needless to say, more counties and police departments need to be exposed to trainings that could greatly impact their ability to better serve their communities.

If you see that your county in your particular state does not offer this program to those in uniform, or if you live in one of the six states that do not offer the program at all, what are you prepared to do to urge community leaders and police departments to change this predicament?  If we do not demand that such programs become widespread, then how are we going to protect those in our communities who could fall victim to this kind of police brutality due to misinterpretation and stigmatization?

Dealing with Stress: Are you Rational, Emotional or Wise-minded?

Dealing with Stress: Are you Rational, Emotional or Wise-minded?

The Peer Support Movement Is On the Rise!