byBrittney Cobb
in Criminal Justice, News
0
ADVERTISEMENT
Share on FacebookShare on TwitterShare on LinkedinShare on PinterestShare via EmailShare on Reddit

Shawn Carter, also known as Jay Z, has been receiving heat from the African-American community for his partnership with Barney’s Department store after incidents of racial discrimination hit the news last week. On October 22, 2013, a 19 year old black engineering student named Trayon Christian filed suit against the New York Barney Department store after a clerk called the police on him when he purchased a $300 belt. After his purchase, the student was immediately stopped on the sidewalk  by two NYPD officers after he exited the department. The officers were told by the store clerk that Christian had a stolen credit card, and the officers then questioned Christian as to how he was able to buy such an expensive item. Officers hauled Christian to the local precinct, where he showed police his identification, his debit card, and the receipt for the belt, yet officers still did not believe him until the bank confirmed his identity.

After Trayon Christian’s story hit the news, another African-American Brooklyn resident,  Kayla Phillips, came forward to share a similar incident she experienced last February. Kayla reported that she went into Barney’s Department store and purchased a 2,500 Céline handbag when she was stopped by four undercover police officer on her way to the train station. Kayla made the purchase with a temporary Bank of America card which did not bare her name and was only let go by police after she showed them ID as well as her permanent card which had arrived by mail earlier that morning.

An online petition and Twitter messages from fans have been circulating this week, calling on the star to bow out of his upcoming partnership with Barneys for the holiday season, which will have the store selling items by top designers, inspired by Jay-Z, with some of the proceeds going to his charity. He is also working with the store to create its artistic holiday window display.

But Jay-Z — whose real name is Shawn Carter — defended himself, saying that he hasn’t spoken about it because he’s still trying to figure out exactly what happened.

“I move and speak based on facts and not emotion,” the statement said. “I haven’t made any comments because I am waiting on facts and the outcome of a meeting between community leaders and Barneys. Why am I being demonized, denounced and thrown on the cover of a newspaper for not speaking immediately?” he said, referring to local newspaper headlines. Read Full Article

These incidents continue  to reinforced the prevalence of discrimination is our school systems, the workplace, and society at large. For the sake of argument, maybe one might have some suspicion as to why a college student would be able to afford such an expensive item, but how did the store clerk know that she was servicing a student? Was it not possible he came from an affluent family that was able to support the costs of the belt? No matter the circumstances, what this proves is that African-American young men and women are criminals until they are proven innocent in which these presumptions are leading to discrimination, harassment, and in some case death.

As an African-American woman, I see and face discrimination on a regular basis especially as a  minority college student at a predominantly white institution. However, I have also been discriminated against within my race by other African-Americans. I have seen both sides of the spectrum and been judged on the simplest of things such as the way I wear my hair. Discrimination is a inconsolable and oppressive practice that I will never get use to, but I will also never use discrimination as an excuse. 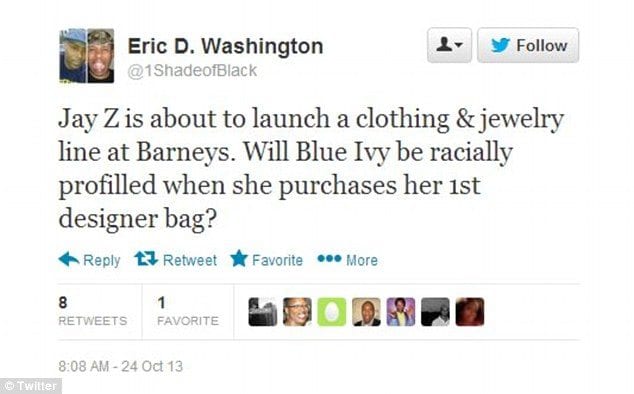 You can read Jay-Z’s full statement using this link.

Living with a Mental Illness: Interview with Casey Wilson