Stand Up and Speak Out: No Bullying Allowed

byBrittney Cobb
in News, Technology
0
ADVERTISEMENT
Share on FacebookShare on TwitterShare on LinkedinShare on PinterestShare via EmailShare on Reddit

In recent news, a Florida teen was cleared of a felony charge of third-degree aggravated assault stalking  from bullying that led to the suicide of a 12-year-old girl in September. Rebecca Ann Sedwick had been ‘absolutely terrorized’ by the other girls before she climbed a tower at an abandoned concrete plant and hurled herself to her death. The bullying apparently started over a ‘boyfriend issue’ at Crystal Lake Middle School.

Katelyn one of the girls accused stated, “No, I do not feel l did anything wrong.”Katelyn and a 14-year-old girl were charged last month after Polk County (Fla.) Sheriff Grady Judd saw a derogatory post on Facebook that he claims was written by one of them. The Facebook post said, “Yes ik [I know] I bullied Rebecca and she killed herself but IDGAF [I don’t give a f—].”

Bullying is becoming a huge problem in today’s society.

What can we do? 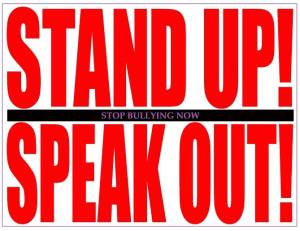 Teaching kids and teens that bullying is not cool is one of the first steps we can make in educating our youth. As adults, we should model the behavior we want our children to exhibit as well as encouraging them to report if they see bullying happening. By encouraging them to speak up, it recognizes that not saying anything is just as bad as participating.

Bullies are often victims of abuse themselves or are lashing out because of  low self-esteem and other personal issues in order to make themselves feel better. Bullies can also be the”popular” kids or teens that are liked by many of their peers and teachers. No matter who it is it should not be tolerated. Joking with your friends is one thing, but teasing someone to the point where they’re afraid to attend school, ride the bus etc is unacceptable.

Teachers should also take bullying serious and intervene when possible. Managing their classrooms, investigating and knowing their students, recognizing relationships between their students, creating rules that allow victims to confide in and trust them are all major steps in confronting this epidemic.

As hard as it may be, I think encouraging victims to speak up for themselves and tell someone they trust about the bullying is necessary to begin addressing the root of the problem. One of the most important things a person should demonstrate is respect for themselves and others. Identifying ways to increase self-esteem is the first line of defense against bullying which results into lower self worth and inferiority.

Early years are an important time for parents, teachers and other forces in the child’s life to enlighten them on how to relate with their peers. If we start there, I think we can make a difference.