Seniors or the elderly are sometimes unfairly subject to gentle mockery on the basis of their supposedly unreliable memories and an inability to adapt to technological innovations, but as this article will argue, it is now an anachronistic stereotype. Today, most people are now fortunate enough to have access to the internet and retirees are no exception. It helps, of course, that the Internet itself is approaching its twentieth birthday, and technology has become more compact as well as more user-friendly.

Changes For The Better 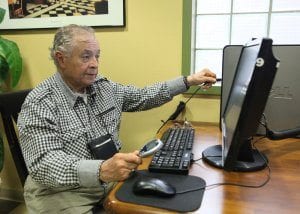 One factor that has encouraged mature citizens to embrace digital technology is that the experience itself is has become simpler. Dial up and ISDN connections were appalling and frustrating to use. In hindsight the early days of the Internet was dominated by poorly designed web pages that were non-interactive and not visually appealing to users.

It has only been since the advent of broadband access that surfing the Internet has become a much more palatable experience. Five or six years ago, accessing video could be a vexing experience dogged by low picture quality and problems with streaming. Nowadays, Netflix demonstrate that whole TV series can be watched on demand at the click of a button.

Additionally, the advent of WiFi was a critical innovation because it made computer access mobile in addition it enabled multiple users to connect to the net from wherever they chose inside the home.

The hardware that we used has changed dramatically too. Perhaps the first decade of the Internet’s existence, from around 1995, the dominant device was the desktop.

Heavy, immobile and expensive, the desktop  is undoubtedly powerful, but it can nonetheless be a difficult beast to handle. By contrast, today’s touchscreens are widespread and are intuitive to use which makes accessing the web less intimidating. Tablets, in particular, combine reasonably sized screens with portability and ease of use.

A 103-year old great grandmother from Wales is the oldest Facebook user and probably the oldest iPad user in the world as well. Lillian Lowe is said to have created an account on Facebook weeks ago with the intention of getting updates from her seven grandchildren and 13 great-grandchildren. Lowe says she has become a Facebook fan since she signed up. The tech-savvy grandmother updates her Facebook account twice a week, and is said to have loved the new features this social networking site offers. Read Full Article

Modern devices are simply much less intimidating than their antecedents. Given that so many aspects of modern life are dependent on or best accessed through the Internet, it’s no surprise that pensioners have adapted to its benefits. Whether asking Google “How much is a stairlift?” or online banking, senior citizens can no longer be accused of being technophobes. Silver Surfers are a large and growing part of the web’s daily traffic and more app development should be made to cater to their needs.