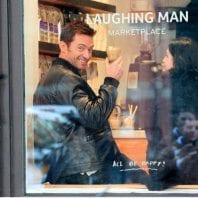 For years, Hugh Jackman has made a living portraying larger than life characters such as Wolverine in the X-Men film series and Jean Valjean in Les Miserables. But now, the Australian-born actor is diverting his attention to the world of free trade coffee as the founder of Laughing Man Coffee & Tea which is a brand under the umbrella organization Laughing Man Worldwide. 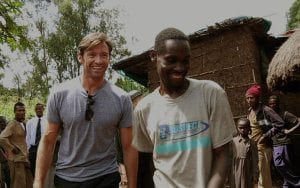 The idea for this venture came a few years ago after Hugh Jackman served in Ethiopia as an ambassador for World Vision. While there, he encountered Dukale, a small-time coffee farmer whose hard work and level of commitment made a profound impression on him at the time. Later, Jackman wrote of his experience in an article on Fast Company, “I also sensed a kinship with Dukale…like me, he was a worker and a father who wanted to thrive and provide for his family.”

Hugh soon discovered that the coffee business was not set up to benefit the small farmer. Upon his return from Ethiopia, Jackman voiced his concern to the United Nations about the need to work with farmers like Dukale, so they could realize a fair trade price for the coffee they produced. As a result of these circumstances, Hugh Jackman partnered with David and Barry Steingard to create Laughing Man Worldwide in order to help create a fair and equitable market for the small coffee farmer.

According to an official statement on the company’s website, Laughing Man Worldwide was established to recognize the power of entrepreneurship, ingenuity, livelihood, and access to such opportunities. The company helps entrepreneurs by creating and developing new businesses, and in return for that help, Laughing Man Worldwide receives some ownership. 100 percent of their revenue goes back to education, community development, and new business development. Laughing Man Coffee & Tea is the first venture under this model. 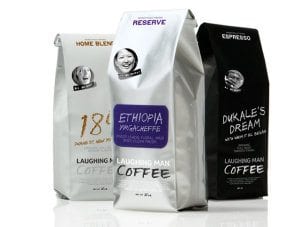 In October 2011, Laughing Man Coffee & Tea opened its first café in the lower Manhattan neighborhood of Tribeca. The tiny, stylish establishment is adorned with wooden shelves displaying the brand’s signature coffee beans and grounds, teas, and hot chocolate, which are also available for purchase on the Laughing Man website. Its products are made with crops from farms in Ethiopia, Peru, Guatemala, and Papa New Guinea.  There is even an espresso blend bearing Dukale’s namesake.

Hugh Jack has often stated in interviews that his charitable work with Laughing Man Coffee was inspired by the late Paul Newman. In 2005, the legendary actor established Newman’s Own Foundation to sustain the legacy of his philanthropic outreach. To this day their business model remains true to Paul’s original mission and values, using only all-natural, high-quality foods and donating 100 percent of their profits to charity.

Choosing the name Laughing Man was no accident. Their official motto is “All be happy,” which is the atmosphere their customers experience when visiting their Tribeca café.

“What I love about this place is their ethos; they’ve created something that makes everyone happy. They’re living and breathing their life philosophy through their business and I believe this is the way all businesses will have to operate in order to survive in the immediate future”, wrote Claire Storrow, who visited on a 2013 trip to New York.

Jeuron Dove is the Entertainment and Sports Staff Writer for Social Work Helper. He graduated from North Carolina A&T State University with a degree in Journalism. He is an active blogger who enjoys writing about professional wrestling, the writing lifestyle and a variety of other topics in his spare time. You can read his blog at www.jeurondove.com. View all posts by Jeuron Dove