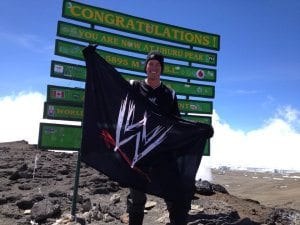 It may be safe to assume that professional wrestling and mountain climbing are two activities most people do not normally associate together. John Layfield, better known to wrestling fans as John Bradshaw Layfield or simply JBL, is making the connection a bit easier. The former WWE Champion is combining his passion for both to bring awareness to the youth of Bermuda through his Seven Summits of Bermuda Challenge.

John Layfield competed in WWE from 1996-2009 and currently serves as an announcer on the company’s flagship shows, Monday Night Raw and Friday Night SmackDown. In addition to his announcing duties, he runs The Layfield Report website which highlights a variety of his views and opinions in numerous articles, and hosts a weekly show on WWE’s You Tube channel, with broadcasting colleague Michael Cole, aptly titled the JBL & Cole Show. 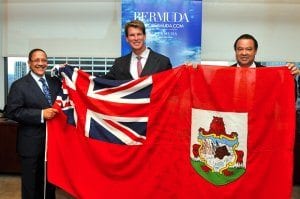 Layfield is looking to climb the world’s seven highest mountain peaks over a four-year period in an effort to raise money for kids through the Family Centre of Bermuda, an organization that provides intervention services to children who are suffering from family-based problems such as abuse, neglect and other emotional challenges. A professional mountain climbing company called Mountain Madness is going to be helping Layfield organize the trips. WWE is also partnering in the effort. According to Layfield, about 350 people have successfully climbed the Seven Summits.

“When I was a kid, I always dreamed about climbing mountains,” Layfield told ESPN in 2012. “I read every book about it. I formulated this plan to accomplish it.” 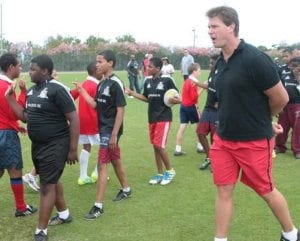 The seven peaks he will be climbing are Mt. Elbrus in Russia, Kilimanjaro in Tanzania, Carstensz Pyramid in Indonesia, Aconcagua in Argentina, McKinley in Alaska, Vinson in Antarctica, and Mt. Everest, which lies between China and Nepal. He plans to plant a Bermudan and WWE flag on each peak as well.

Thus far, he has completed Mt. Kilimanjaro. While attempting Mt. Elbrus and Aconcagua, he and his team were forced to retreat due to inclement weather. They were also on the latter mountain at the same time when two other climbers died as a result of the harsh conditions. He is currently training to climb Mt. Blanc (the highest peak in the Alps not a part of the Seven Summits) and plans on returning to complete Elbrus and Aconcagua.

Since retiring from in-ring competition, Layfield has taken an interest in assisting with numerous charitable organizations. In 2011, he created Beyond Rugby Bermuda, a program that works with at-risk kids and aims to help them graduate, stay away from gangs and become more productive citizens in life.

Layfield posted the following statement on his blog describing his motivation behind forming the organization.

“Every kid has a mountain we encourage them to climb step-by-step. We work with Bermuda’s kids on a daily basis helping them realize their dreams and potential. We do our best to lead by example…everyone has problems, but it is what you do with adversity that makes you successful. This is the message we tell kids and the message we live, and the message I want to instill in every young person we work with.”

College as an Elitist Institution?

Random Acts of Kindness: Lessons for Your Whole Family

Random Acts of Kindness: Lessons for Your Whole Family