Yesterday, the UK’s Crown Prosecution Service announced that it will be prosecuting two men over allegations of female genital mutilation (FGM). Dr Dhanuson Dharmasena, 31, and Hasan Mohamed, 40, both from London, will appear at Westminster Magistrates’ Court on the 15th April and it will mark the first prosecutions of its kind. 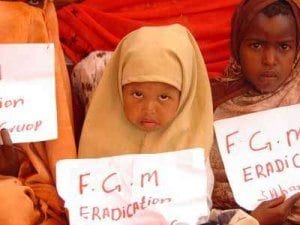 In England, Wales and Northern Ireland, the Prohibition of Female Circumcision Act 1985 was replaced by the Female Genital Mutilation Act 2003. The 2003 Act raised the maximum penalty for FGM from five to 14 years in prison and made it illegal for UK nationals to carry out FGM abroad even in countries where it is legal.

FGM, also known as ‘female circumcision’ or ‘female genital cutting’ (FGC) is defined by the World Health Organisation (WHO) as”all procedures involving partial or total removal of the external female genitalia or other injury to the female genital organs for non-medical reasons”.

It is estimated that approximately 100-140 million African women have undergone FGM worldwide. Journalists Nicholas Kristof and Sheryl WuDunn, authors of the book, Half the Sky: Turning Oppression into Opportunity for Women Worldwide, continue to campaign tirelessly to end gender-based violence. Their book documents numerous true horror stories of women who have been subjected to FGM around the world and the subsequent physical and psychological trauma that they have to overcome. The physical ramifications include severe pain, heavy bleeding, infections, cysts, difficulty in menstruating, sexual dysfunction, complications in pregnancy and fatal haemorrhaging. In addition to this are the social and psychological implications for the woman.

However, this is no longer an African problem as today’s announcement recognizes. FORWARD, an African Diaspora charity which campaigns to eliminate FGM, estimates that 6,500 girls are now at risk in the UK. The majority of those at risk are from African, Middle Eastern and Asian communities. Despite it being outlawed in the 1980s, it is precisely because of the ethnicity of those affected that the law has been so slow to prosecute. Lack of understanding around new, incoming communities, and a fear of demonstrating cultural superiority, rather than embracing multi-culturalism, has left FGM unaddressed. However, thanks to the hard work of campaigners from the African and Asian British communities, the nation is finally realizing that abuse is abuse and torture is torture, regardless of your culture.

Recognizing the universality of abuse is a huge success for Human Rights campaigners. However, there is another factor that needs to be acknowledged if we are to see an end to FGM. For too long, FGM has been referred to as a “Women’s issue”, much in the same way that rape and sex trafficking previously were. Of course, like rape and sex trafficking, this is not a “Women’s issue” but rather a Human Rights issue that not only affects all people, but should really matter to all people. Describing it as a “Women’s issue” confines it to the responsibility of women to sort out; as if the many male perpetrators have no role to play in its prevention and eradication. It also separates the woman from her integral place in the fabric of society; as a Daughter to a Father, a Sister to a Brother, a Mother to a Son. The systematic mutilation of women simply does not only affect women. It is a “Men’s issue” too.

Hopefully these two prosecutions will mark the end of this horrific practice in the UK and place even greater pressure on its acceptability internationally.