The 5th Woman Stage Production is a Voice for Women

byDr. Michael Wright
in News
0
ADVERTISEMENT
Share on FacebookShare on TwitterShare on LinkedinShare on PinterestShare via EmailShare on Reddit

I am always excited to hear about driven individuals who are doing courageous things. However, I am also intrigued by the arts and production. Add to that my hope for social justice, and you know why I had to interview the producers of the upcoming play The 5th Woman. The production is an ensemble stage play appearing for one night only April 25, 2014 in Knoxville, TN.

One of the primary cast members told me about the production, and I was excited, intrigued, and hopeful. I made contact with one half of the executive production team, Marcus Carmon, owner of Carmon Sense Productions. He provided some answers to my questions and deepened my understanding of the social justice message embodied in the 5th Woman. With the power of media and arts to tell stories and change minds, with Women’s History Month 2014 just ending with the close of March, I thought it important to share this interview. 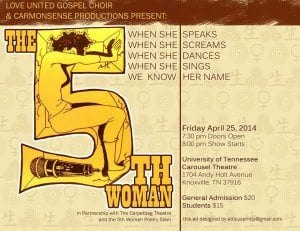 What is Carmon Sense?
Carmon Sense Productions is an entertainment company created in 2009 by myself Marcus Carmon and my wife Rhea. Our vision is to bring a mix of original and diverse art productions to the city of Knoxville which is already an art-rich city.

Where is it based?
Carmon Sense Productions is based in Knoxville, TN.

What is the origin of The 5th Woman stage production?
My wife Rhea Carmon originally thought about doing a one woman show many years ago but it wasn’t brought up much. Less than a year ago she got together with the other ladies in the show (Dominique Boyd, Jessica Sessions, Shekita Arnold, Lauren Elysse) and the one-woman show grew into something bigger, better and powerful. It grew to become The 5th Woman.

What social justice themes are the core of the production?
The ladies address issues and themes that all women share in common. Sexism, motherhood, love, relationships, social pressures and more. The core message is about women loving each other. Caring about each other and being selfless enough to lend an ear to listen and a shoulder to cry on. It’s a positive and honest message in a world where women are often portrayed in the media as being catty and unable to get along with one another.

In presenting each woman, what is the message for the audience?
Each of the dynamic artists has a unique yet familiar voice that will reach persons in the audience who also think and share similar perspectives. Whatever story you have to tell as a woman, tell it. The days have passed when the struggles of women, personally or publicly, are silenced due to chauvinistic values. Every type of woman or person is guaranteed to be touched by the message in the 5th Woman.

swhelper.org speaks to many helping professionals. Why would they benefit from seeing the 5th Woman?
I think it is always good for professionals to engage with art. Art often imitates life and is intertwined in the way that a lot of companies market and do business. The 5th Woman will show that all women and people in general are different and must be treated accordingly. This practice and thought is definitely useful in a social setting where sensitivity concerns can be problematic.

How can folks who are not able to see the opening night get a chance to experience the production?
The 5th Woman will only run for one night April 25, 2014 at the Ula Doughty Carousel Theater on the campus of the University of Tennessee Knoxville. However, depending on the public demand the ladies would love to give an encore performance.

Do you have other things to communicate about the 5th Woman?
The 5th Woman is a theatrical poetry production that combines that grace and beauty of dance, the melodic harmony of song, the power of theatre and the undeniable force of the spoken word to create a unique presentation of artistic expression. The production takes place on the University of Tennessee Campus April 25, 2014 and tickets are $15 for students and $20 for the general public. [Available Here]

Do you have other upcoming productions slated for Carmon Sense?
Carmon Sense Productions is looking to start on its first web series this fall. We are also currently creating a musical inspired by the Harlem Renaissance. We are looking to do a lot more film and intermingle it with stage performances.