byStephanie Pinsky
in Immigration, News, Parenting, Politics
0
ADVERTISEMENT
Share on FacebookShare on TwitterShare on LinkedinShare on PinterestShare via EmailShare on Reddit 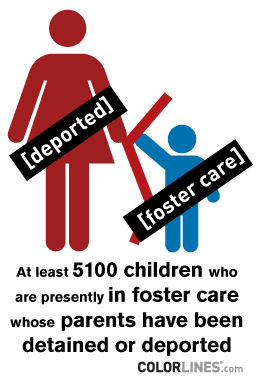 Unlike other forms of child protective removal, undocumented parents need not present any previous risk to their child’s safety; removal can be entirely warranted by the parents’ forced detainment and deportation. According to a national study by Race Forward, once a citizen-children of an undocumented parent enters the child welfare system, the parents are at higher risk for termination of parental rights because detainment and deportation significantly impairs their ability to participate in child welfare planning and custody hearings. The citizen-children of undocumented parents are also more likely to be placed in foster care with strangers or in institutions compared to other children as potential kinship-care candidates are less likely to be U.S. citizens.

In 2011, the United States was home to over 5,821,000 citizen-children with undocumented parents. Over the same time that the general rate of deportation has doubled, the rate of deporting parents with US citizen children has quadrupled. In 2011, about 22 percent of deportations were parents with citizen children compared to 8 percent between 1998 and 2008. According to Race Forward’s ,“conservative estimates” there are currently at least 5,100 children living in foster care because their parents have either been detained or deported. This number is estimated to rise to at least 15,000 in the next five years given the increasing rate of deportation in the U.S. 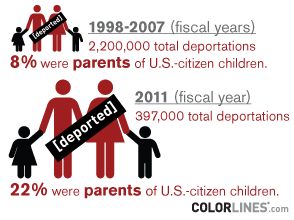 On August 23 2013, ICE released a new set of policy directives entitled, “Facilitating Parental Interests in the Course of Civil Immigration Enforcement Activities.” This directive is the first national attempt to address the growing social problem of separated mixed-status families and its implications have the potential to be very beneficial. However, unless social workers and child welfare professionals are made aware of these new requirements (and hold ICE accountable to them), this directive may only have a small impact.

Below is a a brief overview of the policy directive and other critical policies affecting parents in the immigration system and child welfare system. Following this breakdown is another quick overview of the issues that remain unaddressed and will continue to plague mixed status families who at risk for losing their children due to their entanglement with the immigration and child welfare system.

ICE’s new policy directive is a long-awaited step in the right direction for mixed-status families. Yet, Emily Butera of the Women’s Refugee Center’s explains in her blog, child welfare advocates support the directive with “cautious optimism.”

The directive will provide relief for thousands of mother and fathers who face separation due to their entanglement with immigration and child welfare systems. This policy enables parents to fight for their rights while in detention centers and after deportation by allowing them the opportunity to comply with child welfare case planning. It increases accountability and service coordination by designating field personnel and directors to oversee the facilitation of parental rights. At its core, this policy reduces the due process violations experienced by detained and deported parents and better reflects American’s values about family unity and wellbeing.

Despite these gains, the ICE policy directive has not resolved a number of key challenges undocumented parents face in the immigration and child welfare system. Most importantly, parents with citizen children will be at a similar risk for detainment and deportation as they were before the policy. In addition, their children will also be at the same risk for entering the child welfare system, as ICE officials will still deny parents the opportunity to make informal childcare arrangement. This unaddressed challenge will continue to unnecessarily place children at risk for foster care entry and termination of parental rights.

In closing, while it may seem easy to demonize the US Customs and Immigration System, it is important to recognize they ICE is the only federal administration to formally address the challenges faced by mixed status families in the immigration and child welfare system. So far, no policy action has been taken by the Administration for Children and Families. It will not be possible to effectively respond to this issue unless both systems are at the table and communicating with each other.

The Business of Social Work Practice

Ten Tips for Wrapping Up Your Internship!