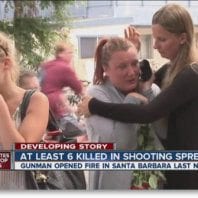 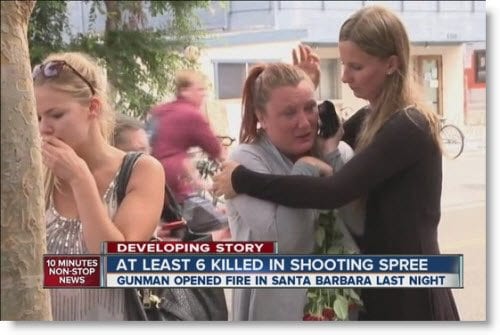 Women are met with broad scale dismissal of their experiences as they react to Elliott Rodger’s misogynist written manifesto, self-made video and the subsequent Isla Vista stabbing/shooting.  One Time article claimed that the Isla Vista attacks and similar atrocities were caused by mental illness, not misogyny.  The author stated that women perceive misogyny in this act because we receive unequal pay, endure “odd comments” about rape, and are underrepresented in positions of power.

Conversely, blog posts and Twitter trends, such as #YesAllWomen, make it clear that women attribute misogyny to an act where the perpetrator claimed women should die for not giving him the sexual attention he “deserved” because male entitlement to female bodies and violence against women are pervasive social issues.

Identifying misogyny as a contributing factor to this atrocity isn’t just about unequal pay.  When the incident made the news, a friend posted this Margaret Atwood quote to Facebook, “Men are afraid that women will laugh at them. Women are afraid that men will kill them.”  This is about the problem of feeling entitled to female bodies: to comment on them, touch them, and to harm them—a reality that women face daily.  This is about living in a society that tells women “don’t get raped,” “you’ll ruin his life if you report it,” and “you were drunk.”

The dismissal of women’s voices and their experiences in society is only one area of concern for me as a social worker.  One of the most prevalent objections to the concerns women have raised is that mental illness is the only explanation for violence.  A spokesperson for Rodger’s family suggested that Rodger’s violent acts were the result of Asperger syndrome.

Recently, while leaving a strip mall with the sunset ahead of me, I made my way to the back parking lot by way of a pathway that separated stores.  It dawned on me in that moment, as it does every time I visit the strip mall, that I am uncomfortable in that lot at night.  It’s closer to the stores I patron which is convenient when I have heavy bags or children in tow.  However, store windows do not face the lot and its distant location from popular stores renders it desolate in the evening.  I forced individual keys from my key ring between my fingers as I walked onto the cracked pavement when I quickly noticed a middle-aged man sitting in the driver’s seat of a pick-up truck watching me intently.

I looked ahead, lamenting that I would need to walk behind his truck to reach my car.  I was startled from my resolve to move forward when his truck engine engaged and his brake lights blinked on just as I was walking behind him.  He hung his head out of the window.

“Oh don’t you worry sweetheart; I’m not gonna hit ya,” he smirked unabashedly and then winked at me.

My stomach lurched in discomfort.  My brain said, get out of here.  I hurried to my car and quickly slid into the driver’s seat.  Like clockwork, I did what I always do when I drive alone after years of encountering strange men in parking lots.  Swing the door closed as I sit, lock door as I find the ignition with my other hand, start car, foot on break, check mirrors, then strap seat belt, prepared to leave at a moment’s notice.  One fluid motion.  Survival.  I was relieved to drive away.

Shaken from the incident, I posted about it to Facebook hoping to find some camaraderie from friends.  In the midst of supportive comments one person defended the man and said, “You’re just looking to be offended.”  She dismissed my intuition and experience and demanded I consider his point of view.  Maybe this was his awkward attempt at being nice?  When she finally concluded that my reaction to the incident was “unladylike,” I hit that trusty “unfriend” button faster than lightning.

My parking lot encounter—the suggestive expression and gendered remark, the contrast between his large vehicle and my unprotected flesh—was itself violent in nature.  When a man touts entitlement to female bodies and plots violence as retribution for being “denied” what he is entitled to, the last thing we should do is dismiss women’s reactions or refuse to look systemically at the issue.

Through engaging in storytelling of just one of my own experiences with gender-based violence as a woman, I hope to contribute to a dialogue that will inspire change.  As a social worker, I know that there are countless ways my profession can serve in the wake of these atrocities.  We can assess these issues at all levels of practice–micro, mezzo, and macro.  We can provide services and evaluate our interventions on each of these levels to address societal violence.  We can stand with women and push back against the dismissal of their experiences.

We can ally with individuals in need of mental health services for policy change from a strengths perspective.  Lastly, we can act as witnesses to those who have experienced loss and trauma, and companion those who grieve as a result of the violence in our society.  Social workers, when it comes to violence in society and those who are victimized by it, our knowledge, skills, and values are needed.  Survivors of violence, we are listening.

Although the view that mental illness is the sole factor behind acts of mass violence does involve a systemic implication that mental health services should be expanded, I respond to this with a strengths based lens.  Yes, access to mental health services absolutely must be expanded.  However, the existing dialogue is often “othering” by demanding help for “those people” as though individuals with mental illness cannot hear what is being said about them.

The dialogue does not acknowledge that a great number of people with mental illness are not violent nor does it highlight their strengths.  It does not empower them to define their own problems or to direct how their needs should be met.  When advocating for policy change, we must ensure that we do not convey damaging or pathologizing messages in the process of doing so.

Amanda H.L. Transue-Woolston, MSS is an author, speaker, and social worker with a Bachelor's degree and a Master's degree in social work. Amanda has served the adoption and foster care communities through individual and family clinical work, group work, writing and presenting, and working for positive policy change. Her writing and presentations have reached broad audiences through multiple books, magazines, major news and radio interviews, and conferences, and she has engaged with legislators at the state and congressional levels on adoption policy. Amanda founded Pennsylvania Adoptee Rights and the collaborative writing project Lost Daughters.  Amanda co-facilitates an adoption support group for anyone connected to adoption, and is a quarterly contributor to Gazillion Voices Magazine.  She is the author of "The Declassified Adoptee: Essays of an Adoption Activist" and a co-editor and contributor to numerous other works.  Amanda is best known for her internationally recognized, award-winning adoption blog, The Declassified Adoptee.  Find more of her work at www.amandawoolston.com. View all posts by Amanda Transue-Woolston