People of color have been disproportionately impacted by mass incarceration. While African-Americans and Latinos make up 15 and 17 percent of the population, respectively, they account for 38 and 23 percent of the prison population. Currently, African-American men have a 1 in 3 chance of going to prison in their lifetimes and Latino men have a 1 in 6 chance. These figures are overwhelming compared to the rate of incarceration for White men, who have an overall 1 in 17 chance of ever going to prison in their lifetime.

Racial inequality in incarceration is particularly evident for drug offenses. Currently, two-thirds of all people in prisons for drug offenses are either African American or Latino. According to Marc Mauer, Executive Director of the Sentencing Project, “These figures are far out of proportion to the degree that these groups use or sell drugs”. For example, a 2011 survey by the U.S. Substance Abuse and Mental Health Services Administration found that White Americans use every category of illegal drugs at significantly higher rates than African-Americans or Latinos, yet they are far less likely to be convicted for drug offenses. 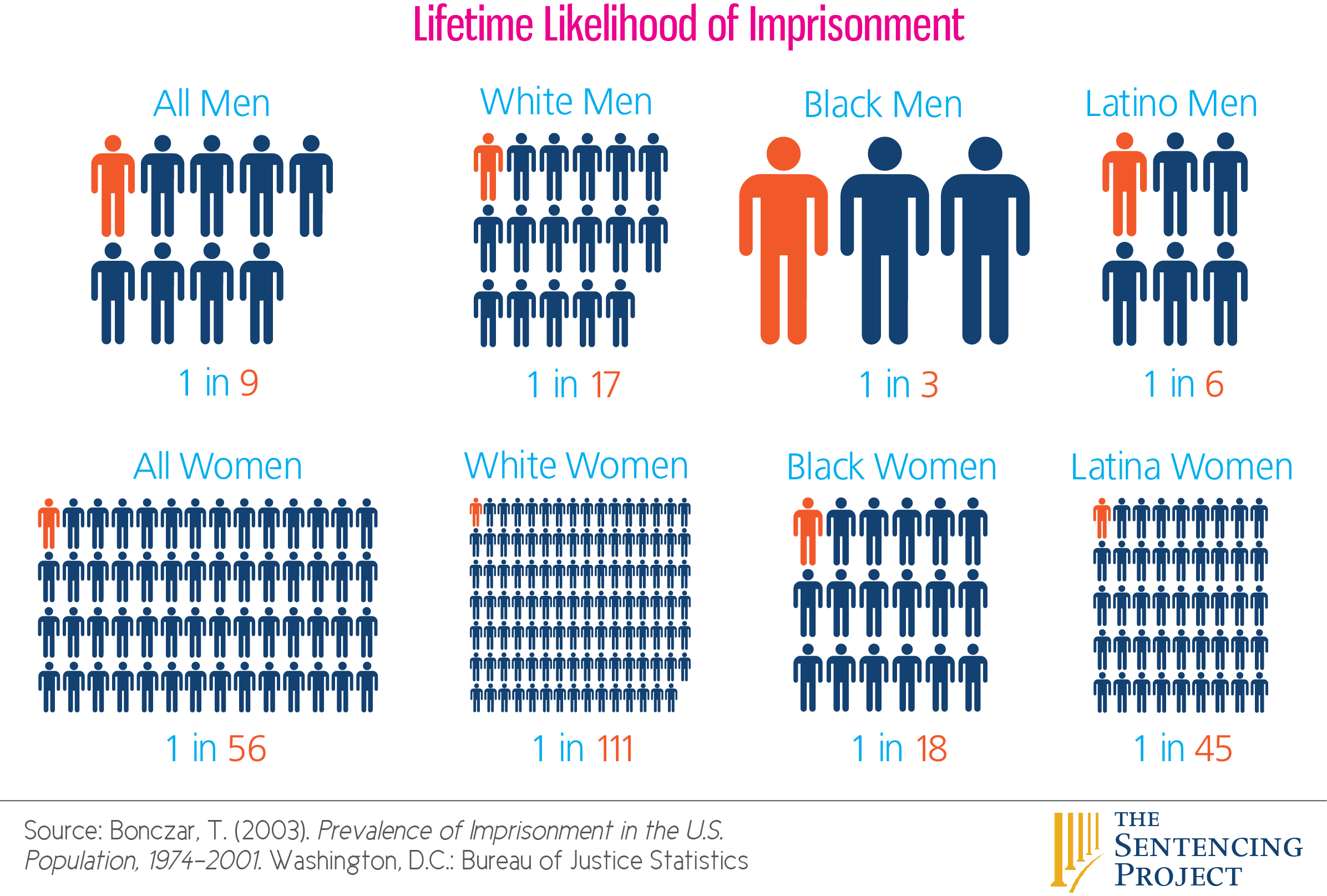 Advocates for prison downsizing agree that mass incarceration and its disparate impact on communities of color can be directly attributed to policies stemming from the “War on Drugs.” In response to rising drug use in the 1980s, law enforcement and sentencing shifted dramatically to a punitive “hard on drugs” approach encouraging the imprisonment of low-level, non-violent drug users and sellers. Since then, the prison population has increased five-fold and incarceration for drug offenses has gone up 1,100 percent. With as few as 40,000 drug offenders serving prison sentences in 1980, this number has snowballed to over half a million in 20092. Lengths of prison terms have also dramatically increased.   In 1986, drug offenders spent an average of 22 months in federal prison; by 2004, sentences for similar crimes were nearly 3 times longer. In sum, over the past 40 years more and more people have been arrested and sent to prison, while fewer and fewer have been released or diverted. 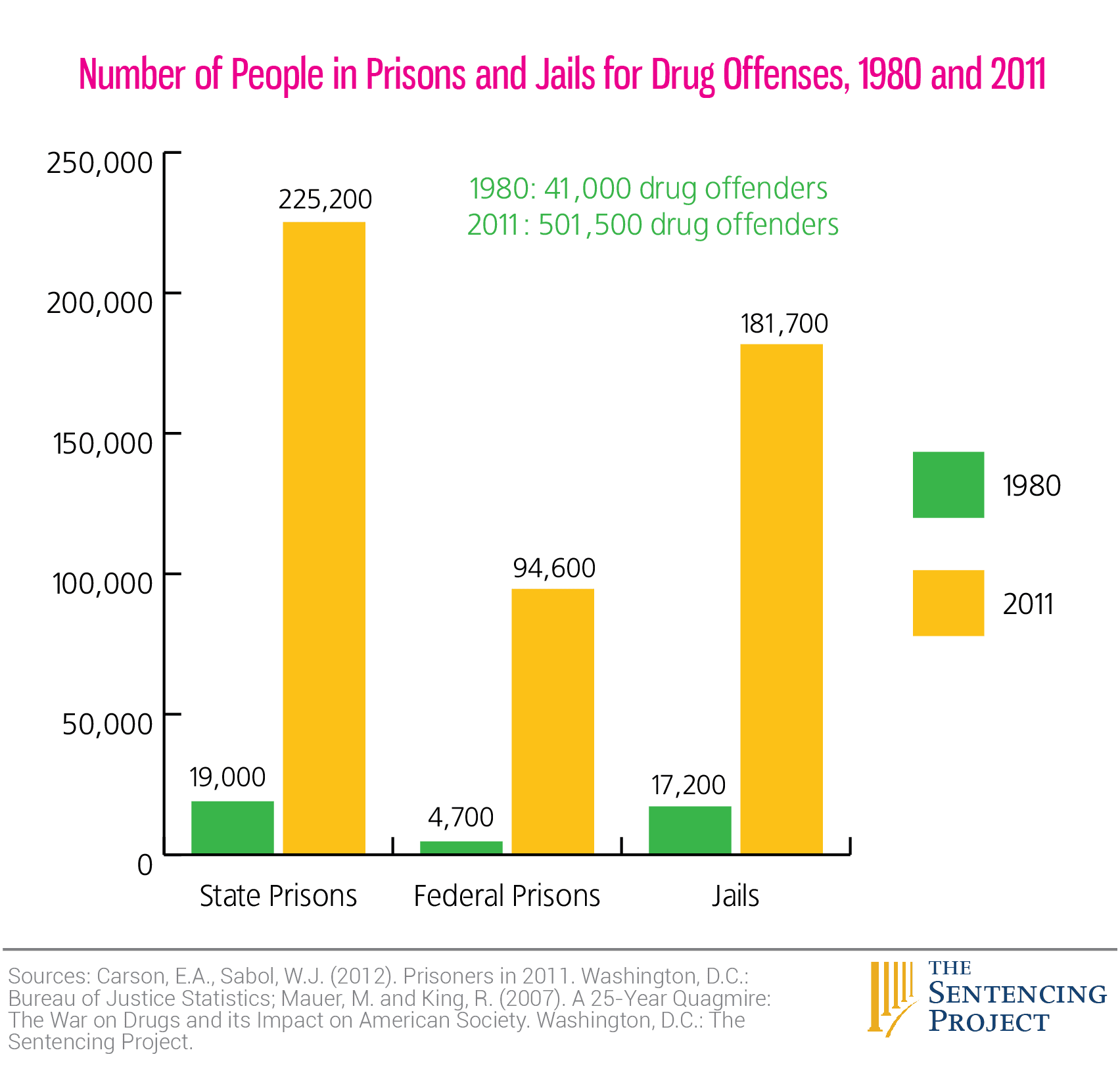 Racial bias, discrimination, and unequal treatment under the law have also characterized the United State’s anti-drug crime agenda. As the ACLU’s Drug Policy Litigation Project explains, “By 1980, the link between minorities, drugs, and crime was firmly cemented in American rhetoric and anti-drug policy.” Evidence of discrepancies in the treatment of people of color in the criminal justice system has been well documented.

Though not explicitly racist, many anti-drug policies and implementation strategies echo the American Legal System’s long legacy of racial injustice, continuing the American tradition of targeted injustice against people and communities of color.

The most notorious and influential policy resulting from the War on Drugs are federal mandatory minimum sentences for drug offenders. Mandatory drug minimums are judicial guidelines requiring convicted drug offenders to serve an automatic and standard minimum length of time in prison- regardless of criminal context. These policies are rooted in the Controlled Substances Act of 1970, which first established the national drug schedule, followed by the Sentencing Reform Act of 1984, which outlined punishments for federal crimes. The resulting mandatory minimums are “triggered” by specific quantities of eight controlled substances, including heroine, crack and powder cocaine, marijuana, with increasing minimums for large quantities and aggravating factors such as weapon procession or drug trafficking (mandatory minimums are also triggered from LSD, PCP, methamphetamine, and propanamide.). Unlike the majority of crimes in the U.S., for which judges determine sentence length on a case-by-case basis, mandatory minimums intentionally restrict judicial discretion7.

However, mandatory minimums were not considered controversial until the 1986 Anti-Drug Abuse Act. With this omnibus drug bill, President Reagan significantly increased the length of minimum sentences while reducing the quantities of controlled substances that trigger the minimum. These guidelines form the basis for our current federal drug sentencing and require either a five or ten-year sentence without parole for the majority of convictions9. Due to aggravating circumstances, some offenders can be sentenced to life in prison without parole. These changes had major implications for first time and low-level offenders. For example, before 1986, simple possession would have required offenders to pay a fine. After 1986, these same individuals could be sentenced to a federal penitentiary for a minimum of two, three, or five years for the least severe offense depending on the substance.

In 1994, Congress approved the “Safety Valve” exception to mandatory minimums. These provisions allow prosecutors to refrain from requesting mandatory minimums for defendants found guilty of low-level offenses, such as simple procession or intent, while meeting certain case key criteria. These requirements include a lack of criminal history, violence, weapon procession, as well as limited involvement in drug enterprise and full compliance with sharing information with law enforcement.

Most recently, the Fair Sentencing Act of 2010 reduced the disparity in sentencing guidelines between crack and powder cocaine. Previously, 1 gram of crack cocaine was held to the same standards as 100 grams of powder cocaine. After 2010, this gap was amended to a 1 in 17 ratio. While this ruling represents a positive step towards sentencing equality, a disparity between the two substances remains. 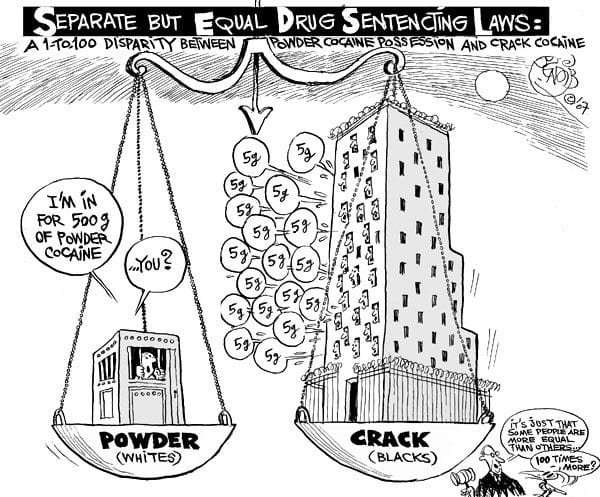 Despite the efforts of the Fair Sentencing Act and Safety Valve procedures, federal mandatory drug minimums continue to support an unsustainably large and racially disproportionate prison population. These shortcomings are highlighted when considering the two primary intentions of the mandatory minimums- both of which have failed to be realized.

First, mandatory minimums were intended to reduce major drug trafficking. Rather, these procedures have been used to incarcerate low-level offenders. As penalties are determined by the quantity of drugs involved, this broad policy fails to recognize the function or threat of the individuals who are typically arrested and charged with drug trafficking. For example, a currier may be carrying large quantities of a substance but often represents the least culpable participant in an international drug selling organization. In the Sentencing Commissions September 2013 report to Congress, they reported the category of drug offenders most often subject to mandatory minimums are street level dealers, many levels away from major suppliers and trade leaders. As their report explains, “While Congress appears to have intended to impose these mandatory penalties on ‘major’ or ‘serious’ drug traffickers, in practice the penalties have swept more broadly.”

Second, mandatory minimums were intended to reduce sentencing disparity. The original authors believed limiting judicial discretion and fixing sentence range would result in uniformed prison terms. However, contemporary research indicates the opposite has occurred because sentencing guidelines continue to require a tremendous amount of judicial discretion while doing little to address the issue of racial inequity head on. For example, judges must decide if a mandatory sentence can be triggered in the first place and if any aggravating circumstances can be proven to increase the sentence above the minimum.

According to a national study conducted at Northwestern University, defendants of color were significantly more likely to qualify for mandatory minimums and aggravating circumstances compared to white defendants, and were also less likely to qualify for Safety Vales exemptions. Their findings indicate 41.1 percent of Latino offenders were subject to minimum guidelines compared to only 28 percent of White defendants. Further, 70 percent of drug cases involving white offenders proved aggravating circumstances, as compared to 88.4 percent of cases involving African-American offenders. Qualitative data from the Northwestern study indicate a number of judges would have preferred to reduce the sentences for people of color, in particular, due to mitigating circumstances but were unable to due to restrictions in judicial discretion. As the conclusion explain,

In light of growing national awareness about the current state of crisis in our prison system, not limited to a failed War on Drugs, overcrowded facilities, skyrocketing recidivism rates, and irrefutable racial inequity, federal policy makers, think tanks, and Attorney General Eric Holder have been pouring over the issue of sentencing reform for the better part of two years. The current status of this effort is a bill known as “The Smarter Sentencing Act” submitted to the Senate floor by the Judiciary Committee on January 30, 2014.

If approved, the Smarter Sentencing Act would:

The Smarter Sentencing Act is a step in the right direction and is likely to have a major positive impact on the prison population if passed. In particular, the retroactive application of the Fair Sentencing Act is likely to reduce the over-representation of people of color in the prison system. However this act is not enough. In particular, a disparity between crack and powder cocaine continues to exist. In addition, only a small cross-section of the sentencing guidelines will be reformatted.

As social workers, we must remain active in the fight to end mass incarceration and the over-representation of people of color in the criminal justice system. We must be creative and vigilant in creating new solutions to prison reform. According the Urban Institute’s “Stemming the Tides” report, here are some suggestions for additional “Front-End Changes” (i.e. reducing the number of people committed to prison and reducing their sentence length) and “Back-End Changes” (i.e. increasing the number of people released from prison and reducing recidivism).

What are your thoughts on prison reform? How can we reduce the prison population, increase racial equity, and find an alternative approach to drug treatment? How can we, as social workers, be more involved in this fight for justice? Share your thoughts and comments below!