byPhilip Patston
in Education, News
0
ADVERTISEMENT
Share on FacebookShare on TwitterShare on LinkedinShare on PinterestShare via EmailShare on Reddit

This past weekend, four people were killed by foreign drivers, which has re-opened a debate about whether tourists in New Zealand need education before they drive here.

I think we’re missing the point. It’s an example of where we point the finger at individuals, or groups of individuals, rather than examining the structural or systemic conditions that affect the behaviour of people.

In the case of these four deaths, I would say that two conditions may have been factors in the tragedies: inconsistent road rules and the weird phenomenon that, in different countries, vehicles drive on different sides of the road. 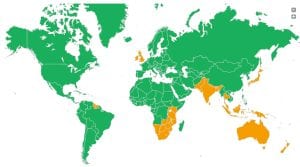 It got me remembering how, when I’ve visited the USA, driving on the other side of the road messed with my head. It wasn’t just being on the “wrong” side of the road and the car, I found it actually affected my spacial awareness of left and right. Let me try and explain.

The weird thing was this: when people gave directions — “make a left,” make a right,” etc — my brain interpreted as “hug the curb,” “cross opposing traffic,” etc — meaning that I muddled up left and right. It also felt almost impossible to turn left over opposing traffic because my brain wanted a left turn to be a simple following of the curb.

The result was that, for the first few days at least, I felt incredibly disoriented. Luckily, I wasn’t the one driving, but yes we did end up on the wrong side of the road a couple of times fortunately without incident.

Why we drive on different sides of the road has often baffled me. I did some research, and you can see which countries drive on which side of the road here, the fascinating history and politics of side-swapping here and some interesting facts about which side of vehicles we sit to drive here.

The accidents I referred to earlier were not necessarily caused by “side-of-road confusion”, though one of the accidents involved the tourist crossing the centre line. However, both tourists came from right-side driving countries.

The other factor that may have been an influence were road rules. In 2012. NZ changed two unusual give way rules, which were confusing to New Zealanders let alone tourists. While there areinternational standard rules to prevent collisions at sea, there are no such standards in road rules around the world. Ironic.

I never thought I’d be arguing against diversity but it seems to me that, until technology is prevalent enough to prevent accidents on the road, we are stuck with a global variety of ideologies that would be far better for us if they were consistent.