The Today Show recently had a series on “Today’s Man” and how the traditional roles of men had changed since the 20th century.  Since the Millennia, our country has dealt with a consistent bombardment of financial crises that affected millions of people.  Many of those affected were indeed men, most importantly, creating a major shift in some of the roles that society had historically identified.   These shifts were not only financial, but somewhat of an epiphany for many men to re-evaluate what was important to them as it related to their respective families. 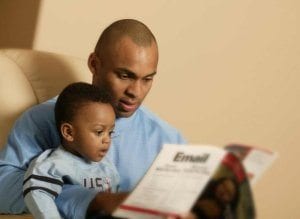 Today’s man or men rather have chosen to slow down their lives and re-invest their time into their families in a manner that wasn’t accepted or tolerated in years past.  In a GQ article, the writer discusses how quitting his job to be home was one of the greatest things he did.  Though not initially easy, his ability at times to work from home and be with his son was something he wouldn’t trade for the world.

Men today are breaking down those traditional norms of how one should act, specifically as it related to rearing children.  For generations men were the providers, not always emotionally available and rarely a nurturer.  That was a role considered more for women, mothers, aunts, sisters and grandmothers.

So why is this shift important to note here, well because when you find active fathers in the lives of their children, it minimizes the many issues we see in young people later on when fathers are absent, albeit, because of work or not living in the home.  Many years ago when my youngest was born, I took paternity leave after my wife returned to work.  At first, some of my colleagues were first surprised, but then chuckled at the notion.  “You mean you will change the diapers”, “feed your son”.   Depending on my mood at that moment or the person to whom I was speaking would garner various responses.  But needless to say, what was so absurd about that?  He’s my son, who says I can’t or shouldn’t be active in his life from infancy.

Tanfer and Mott discussed this concern in 1997 at an Urban Institute conference discussing how important early involvement is in preventing future behavioral issues in children.  According to their presentation, the literature continued to examine consequences of relationship transitions for the development of children, to include parents not being involved, specifically fathers.  This presentation was timely because of the beginning of shifts for men during that period.  Almost twenty years later, we see now that men are becoming more active in the earlier developmental stages of their children.

Even President Obama has pushed this as a major item.  The Office of Faith Based and Neighborhood Partnerships works diligently to promote responsible fatherhood and stronger communities.  Having men involved early in that process doesn’t just help the health development of children, but it expands to building strong and vibrant communities.

Notwithstanding the valiant efforts of women, especially those who have served in both capacities, it is refreshing to see more and more fathers, act like fathers.  In one of my summer courses we recently discussed this shift and whether it helps deter future delinquency and criminality.  Many argued that if indeed helps to set that strong foundation. Does it mean young people will not have challenges or issues, of course not, but by hopefully having a strong man teach children how to handle such future trials and tribulations will go a very long way…. So if you’re a stay at home dad or working dad, let’s continue to break those archaic stereotypes in how we should act with our children.  It’s OK to NURTURE, it’s OK to HUG, it’s OK to show emotion….