Sheldrake and others before him suggest that laws of nature are more like habits. As such laws have changed throughout the course of time. If the universe has habits, then the whole of life, says Sheldrake,”[involves] inherent unconscious memory; habits, the instincts of animals, the way in which embryos develop, all [reflect] a basic principle of inherent memory within life.” 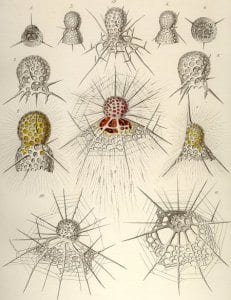 Sheldrake believes that this “inherent memory within life” exists in energy fields, or morphogenetic (form-shaping) fields around and within organisms. He believes that these fields contain the information that enables, for example, an acorn to grow into an oak tree.

He argues that the acorn contains the material (DNA) for an oak tree, but not the “knowledge” of how to form the tree, in the same way that a pile of bricks can’t build themselves into a house. You need a plan and a builder.

He points to the remarkable ability of organisms to repair damage as evidence of this holistic property of morphogenetic, or morphic, fields, for example, the way an oak tree fragment can grow into another oak tree. He goes on to propose that “each species has its own fields, and within each organism [including human beings] there are fields within fields.” These fields contain information about the form of the whole body, as well as limbs, organs, tissues, cells and so on.

Sheldrake’s hypothesis is that “these fields…have a kind of built-in memory derived from previous forms of a similar kind.” He believes that there is a connection between similar fields over time and that “the field’s structure has a cumulative memory, based on what has happened to the species in the past.” This is the process of morphic resonance.

Are you still with me? Good, because this is where it gets interesting…

Sheldrake reckons that organisms can and do inherit the characteristics and behaviours of others similar to them, without being directly descended from them, through morphic resonance. He cites the phenomenon of the simultaneous occurrence of bluetits drinking the cream off the top of delivered milk in Europe in the 1920s as evidence.

This phenomenon began in Southampton UK, then happened in other places 50 and 100 miles away, finally spreading as far as the Netherlands. It was presumed that the behaviour spread by imitation, but apparently bluetits don’t fly more than four or five miles. Even more interesting is that, after around ten years during which time milk was not delivered because of the first World War, the phenomenon reoccurred, suggesting that a morphically resonant connection existed despite a gap of several generations of bluetits.

So, where am I going with this?

Well, Sheldrake proposes that this morphic resonance exists at a human, societal level within and among social groups, accounting for social norms, traditions and rituals.

Next time, I’ll explain this further and propose my own related theory about how people in minority groups change society.

Meanwhile, for more on Rupert Sheldrake and morphic resonance, visit his website.

Back on Capitol Hill, Different Day, Not Much Has Changed

Back on Capitol Hill, Different Day, Not Much Has Changed