Recent events in Ferguson, Missouri and continuous efforts by various states to limit the voting power of progressive constituents demand that social workers be more politically active. Nancy A. Humphreys has led the effort to educate social workers about the importance of being involved in the political process and getting social workers to run for elected office, including Pedro E. Segarra, a graduate of the University of Connecticut School of Social Work and now mayor of Hartford, Connecticut, the state’s capital. As Dr. Humphreys moves into her well-deserved retirement, she has passed the baton to Tanya Rhodes Smith, the new director of the Nancy A. Humphreys Institute for Political Social Work (NAHIPSW).

I asked her what her vision is for the institute going forward. “Setting the course for the Institute is one that takes time and includes the input of our Board of Advisors as well as important voices in the field,” she said. “I strongly believe in collaboration, building upon what we have learned to date and developing models that can be adopted by other schools of social work, agencies and communities to increase the power and voice of social workers and the populations we serve. The Institute has been a resource for those interested in political social work, and I would like to find additional ways to connect and support political social workers in every state.

I think it’s critical that more schools of social work regularly place students in political settings, including the offices of members of Congress, state legislators and local governments. Our Board of Advisors will be helping to set our strategic plan and focus for the next several years in the area of research, education and training, and voter registration and outreach.”

“No one can fill Nancy Humphreys’ shoes. She contributed to the field in countless ways and inspired so many of us to use our knowledge, skills and power to affect policy in a variety of settings. She taught us that civic engagement and political participation is part of our obligation as social workers.

There is a great cost when social workers don’t get involved with the political process because it means that others with less knowledge will make decisions about the populations that we care about and serve. Additionally, political participation and voting directly benefits our clients and our communities, including stronger connections and better outcomes in the areas of individual well-being, such as health, and employment. Social workers need to understand that important connection and the role that we can all play in shaping policy through the political system.” 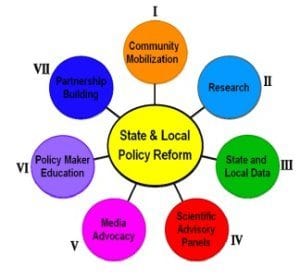 She says she will continue projects such as the Campaign School which will be its 19th year. The Campaign school trains social workers on the inner workings of political campaigns with the hope that participants will run for office and/or assume leadership roles within campaigns as either unpaid volunteers or paid campaign staff. She will continue to emphasize voter registration. The Institute encourages all MSW students to organize voter registration activities in their field agencies.

They are partnering this year with Nonprofit Vote to educate social workers on the powerful benefits associated with voting to nonprofits, communities and to individual voters. And the institute will continue its advocacy training which she sees as an important activity that trains all first year students, as part of a required macro foundation class, on ways in which social workers can and should influence legislative policy.

Finally, I asked her what she sees as the future of political social work. “Nancy Humphreys founded the Institute for Political Social Work with the strong belief that social workers should seek elected office and that political social work practice is a legitimate specialization in the profession,” she affirmed. “There is a wide range of ways that social workers can influence and directly participate in policy decisions being made at the federal, state and local levels.

The career paths of former interns at the Institute as well as students who were placed in political social work settings confirm that social workers are qualified and successful in political roles. In addition to electoral politics, many have gone on to leadership, policy, administration, advocacy and research positions in public and private direct service and advocacy agencies throughout Connecticut and Massachusetts. Expanding political social work will include exposing more BSW and MSW students to the opportunities that exist.”