The number of children living in extreme poverty—on $2.00 or less per person per day in a household—grew significantly from 1996 until 2011. In 2011, 3.55 million children in 1.65 million households were living in extreme poverty in a given month. Income included TANF and other direct cash assistance programs, cash support from family and friends, and income from odd jobs and other sources.

The good news—if you can call it that—is means-tested benefits such as food stamps, the Earned Income Tax Credit (EITC), and Section 8 vouchers lifts two-thirds of these households out of extreme poverty, but still leaves 1.17 million children living off the barest subsistence. Research by H. Luke Schaefer, an associate professor of social work at the University of Michigan and Kathryn Edin, the Bloomberg Distinguished Professor in the department of sociology at John Hopkins University, documents the growing number of children being left behind. 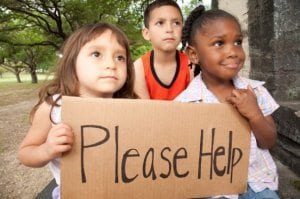 Using data from the Survey of Income and Program Participation (SIPP), they were able to determine how many children and families had slipped into extreme poverty since the beginning of welfare reform. Since welfare reform, the number of adults on TANF has decreased dramatically from 4.6 million at its peak to about one million in 2011.

Living at the official poverty threshold for a family of three would roughly equate to $17 per day per person in a household. People living in “deep” poverty or half of the official poverty line would be subsisting on $8.50 per day. Children and families living in extreme poverty are trying to make it with less than one-fourth of the deep poverty rate. There is a severe price to pay. Life at the bottom of the income ladder is fraught with greater risk of homelessness and housing insecurity, lack of nutritious food and a host of other potential health calamities.

Most of these children have little or no chance of ever making it out of poverty. For children living in the stressful conditions of extreme poverty there is an increase in the probability of being victims of child abuse and neglect, being exposed to domestic violence and other traumatic occurrences, lack of educational stability, living in neighborhoods inundated with drugs, crime, and draconian policing policies that lead to criminal records and spending time behind bars. Not much of a future.

So what do we do about this? How can we begin to lift children of extreme poverty? The Hamilton Project at the prestigious Brookings Institute offers a number of poverty policy prescriptions that include increasing early childhood education, increasing mentoring and other support programs for disadvantaged youth, skills-building for low-income workers, support for the minimum wage and expansion of the EITC, among others.

All are good ideas, but it would take a few generations for any of these policies to have any meaningful impact on extreme poverty. Few policymakers seem to have a notion to address the real problem—growing economic inequality. The economic pie is growing, but every bit of the growth is being swallowed up by a handful of extremely wealthy people while the planet’s population continues to grow.

How To Help Women Who Are Traumatized By Their Jobs

How To Help Women Who Are Traumatized By Their Jobs