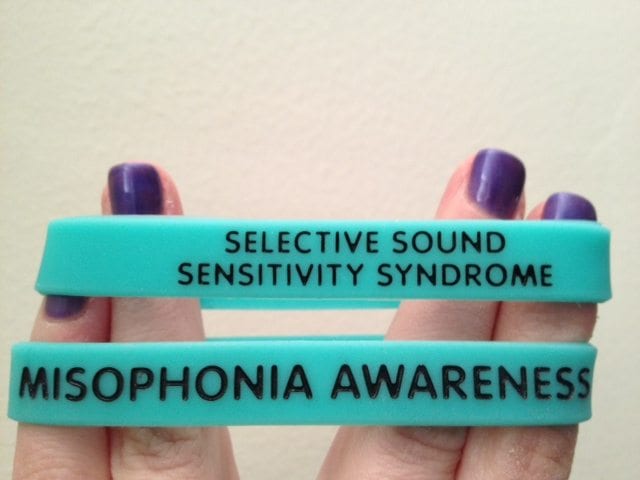 For the last fifteen years, my family and friends have known that I simply cannot cope with the sound of people eating. I absolutely hate it. Similarly, the sound of rustling plastic bags or crisp packets can send me in to a rage. Initially people treated it as a quirk of mine, a phase not to be taken seriously. As my reactions remained consistent year after year, my family began to realize I did not just dislike these sounds that were actually causing me to suffer which eventually led to the diagnosis of misophonia.

The sound of mastication has a very physical and emotional impact on me. The instant I hear someone eating I begin to feel hot and faint, my hands feel weak and I am uncomfortably aware of everything I touch. My anger levels rise within seconds and no matter how much I rationalize with myself, I cannot calm myself down. The result is either an angry outburst where I rudely point out to the person how awful the sound of their eating is making me feel, or I have to leave the room.

As you would expect, having misophonia has led to many awkward situations. The moment you ask someone to eat more quietly, especially when they were not eating noisily to start with, always, without exception, leaves both of you feeling irrevocably uncomfortable. That awkwardness is exacerbated significantly when the person you ask is a complete stranger. I quickly learned not to tell people I have a problem and consequently have instead found myself desperately insisting on background music when having dinner at other people’s houses.

Prior to being diagnosed with misophonia, which literally means ‘hatred of sound’, I would not willingly talk to people about the problem because people usually have one of two reactions; they either think that I am exaggerating or they think it is funny to eat more loudly in an attempt to watch my anger levels rise.

As a teenager, there were several months, where my Mother and I would fall out every dinner time because I would fly in to a rage not only at the sound of eating but also at her belief that I could in some way choose not to have the reaction I was having. I felt so frustrated and isolated knowing that my behaviour was completely unacceptable but being unable to do anything to control it. Misophonia is an embarrassing condition. When I am at a meal with other people, my rational self is constantly saying that I am happy that people are enjoying their food and that chewing is a completely natural and unavoidable aspect of staying alive. But my emotional self is in agony.

Many people have sounds that they find irritating and indeed, the sound of other people eating is a common one, however, much in the same way that people mis-label themselves as anxious or depressed, misphonia is much more intense than a mere dislike of sound. Many people use the word “depression” when they really mean that they are sad about a specific event that happened that day. Those who suffer from depression know the vast difference between the feeling of explicable sadness and the personality-shattering emptiness that is depressive illness. In much the same way, misophonia is very much an illness. It takes your dislike of sound to a level where it affects your quality of life.

Misophonia was formally recognized as a neurological disorder in 2001. However, many Doctors are still unaware of the condition and there is, as of yet, no cure. The Misophonia Activation Scale (MAS-1) was created in order to measure the severity of a person’s condition. The scale ranges from 0 to 10, with level 3 being a manageable feeling of discomfort to level 10 in which the sufferer causes physical harm to themselves or others as a result of the sound. More extreme cases of misophonia are known to have led to divorce, homelessness and social exclusion.

Personally, I have learned some coping mechanisms although it is still something I have to deal with on a daily basis, but music is a life-saver. I manage my anger by playing music at meal times, however this means I am somewhat dependent on music being available. If I get on public transport without my ipod, I immediately feel stressed.

Without music to drown out the sound of any eating or rustling, I am left with the options of either pressing my fingers firmly in to my ears for the whole journey or removing myself from the bus or train, which is far from ideal. Another coping strategy is ensuring that I never meet people whom I know to be loud eaters for lunch or dinner. Whilst that may seem dramatic, it is the only thing I can do to save our relationship.

My family just doesn't understand how hard it is to keep this all inside. The rage, the disgust, the pain it brings.. If they only knew.

Support groups have been set up for sufferers and excellent websites such as www.misophonia-uk.org and www.misophonia.com can give advice about available treatments such as Tinnitus Retraining Therapy (TRT) and Cognitive Behavioural Therapy (CBT) as well as provide information for the family and friends of sufferers. To help those suffering with misophonia please do some reading about the condition. If someone tells you they have the condition please take it seriously as if they were telling you about any other illness; I cannot stress this enough.

Whilst you may not understand misophonia, by ignoring it and refusing to help the sufferer manage the sounds that bother them, you are knowingly inflicting pain on another person. I can tell you from personal experience that misophonia is a very real and distressing condition.

Using Car Rides to Get Teenagers to Open Up