byRebecca Joy Novell
in Criminal Justice, News, Social Justice
0
ADVERTISEMENT
Share on FacebookShare on TwitterShare on LinkedinShare on PinterestShare via EmailShare on Reddit

Everything I say below has been said before, but I want to make it clear that mine is yet another voice from outside of the United States added to the millions of others who are despairing about the events currently unfolding in America.

There is a recurring dream I have where someone I trust betrays me and the betrayal fills me with hurt and anger. The specifics of what that person has done changes from dream to dream but the feeling of intense pain is consistent. 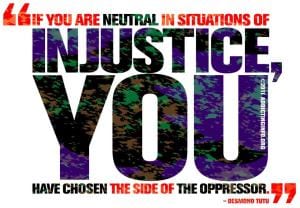 In my dream, I pour my heart out to the person who has hurt me, explaining why their actions have caused so much damage. The offender responds by ignoring me and turning their back. The simple gesture of them turning their back on me almost hurts more than the original betrayal and the pain intensifies through sheer frustration as my suffering remains ignored.

Watching the protests, both in America and London, at the decision of the Grand Jury not to prosecute the Police Officer who shot Mike Brown, I was reminded of that dream. As I watched Mike Brown’s Mother receive the verdict, I saw a second wave of pain flow over her, almost as if she were receiving the news of her son’s death for the first time. Whilst most of us knew that the verdict would not have gone any other way, we all, deep-down held hope that for once- just for once- the outcome might be different.

But of course it wasn’t different, and now citizens across America, as well as those watching the events on television all around the world, are left with feelings of confusion, anger and frustration.

The verdict seems to have re-taught us a lesson which we hoped was out of date. The verdict taught us that some lives are not as valuable as others and that the law does not protect everyone equally. To know that your son, if he is a black male, can be shot and killed by a Police officer whilst he holds his hands up in surrender, and then know that the law will do nothing to prosecute his killer, is the ultimate sign that the law will not only hurt you, but it will ignore your pain.

When placed in the situation where your demands for justice are rejected through “legally accepted channels”, what options are you left with?

I, personally, would never advocate for violence. However in the face of such apparent powerlessness, as we see in Ferguson, I understand why people may resort to rioting.

The facts are this: Firstly, a young man was killed by the state. Secondly, history and personal experience tells us that the police, courts and politicians do lie, again and again. Thirdly, the statement given by Darren Wilson was flawed, and at the very least Mike Brown’s family should expect a thorough investigation and fair trial.

Serious work must start now to create a law enforcement system that people can trust; that people know not to be racist and that does not kill an unarmed man. If these problems are not addressed then peaceful protest will no longer be an option for many for whom the injustice hurts too much.