byDr. Charles Lewis, Jr.
in News, Politics, Social Justice
0
ADVERTISEMENT
Share on FacebookShare on TwitterShare on LinkedinShare on PinterestShare via EmailShare on Reddit

Those of us who have been around for a few decades can remember when having this day to reflect on the transformative life of Rev. Dr. Martin Luther King, Jr. appeared to be another dream just beyond our grasp. But thanks to many Americans, most notably Congressman John Conyers, the late former Senator Edward Brooke, and composer-musician Stevie Wonder, we have this day to remember a man who was the personification of social justice. His assassination on April 4, 1968 at the age of 39 years shocked a nation that was still trying to heal from the death of another iconic figure President John F. Kennedy who was assassinated on November 22, 1963, less than five years before Dr. King was killed. Fifteen years later, President Ronald Reagan signed Public Law 98-144 designating the third Monday of January as a national holiday honoring Dr. King.

More than any profession, social work embodies Dr. King’s commitment to social justice. Today is a fitting time to focus attention on a particular section of the National Association of Social Work’s Code of Ethics: “Social workers pursue social change, particularly with and on behalf of vulnerable and oppressed individuals and groups of people. Social workers’ social change efforts are focused primarily on issues of poverty, unemployment, discrimination, and other forms of social injustice. These activities seek to promote sensitivity to and knowledge about oppression and cultural and ethnic diversity. Social workers strive to ensure access to needed information, services, and resources; equality of opportunity; and meaningful participation in decision-making for all people.”

From the time Rep. Conyers introduced a bill to establish a holiday in Dr. King’s honor four days after his assassination until the signing of the legislation, countless debates took place, heated arguments flooded the airways, and many protests were held on both sides of the issue. One turning point in the effort to establish a day in Dr. King’s honor was the release of Stevie Wonder’s “Happy Birthday” in 1980 that became the rallying cry for millions who believed Dr. King deserved a holiday—not just because he was a great man—but that the nation needed a day to reflect on why his life’s work was needed and some time to consider the progress that has been made. Stevie’s musical tribute and six million signatures on a petition to Congress paved the way for passage of the legislation. There has been some progress made in advancing social justice since his Dr. King’s death, but we still have much more to do. 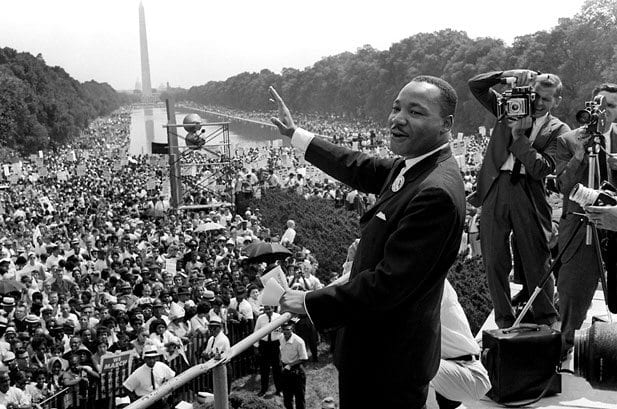 A few weeks ago, I wrote an article about how—in my humble opinion—the Democratic Party seems to be lacking a compelling message of hope that would draw people to the polls to support progressive candidates. Since social workers regard ourselves as purveyors of hope, we need to have a stronger voice in the policymaking process. It is critical that our researchers provide meaningful justification for policies that will reduce economic inequality, protect workers’ rights, limit the amount of money flowing through the political system, and decrease the number of Americans being locked behind bars. These are just a few of the issues that we face in the coming years.