Nineteenth century British philosopher and sociologist Herbert Spencer was the first to coin the term “survival of the fittest.” The idea, also referred to as natural selection, suggests that some individuals are better suited to overcome the challenges and exploit the opportunities within their environments and would thus thrive in situations where others may falter. 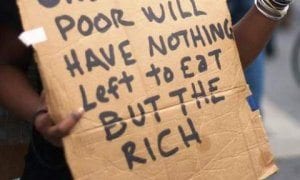 Nations with better armies would prevail over those that were less prepared. People with ingenuity would do better in the free market system.

On the surface these are seemingly reasonable ideas until they are applied to the genetic or cultural inferiority of groups of people. Inequalities and oppressive policies are often justified because it was believed that certain people could not function adequately in society and would squander valuable resources. Thus we were able to live with slavery, poverty, and inhumane treatment of the mentally ill.

This pernicious thinking—that these fatally flawed beings are a dredge on society which would be better off without them—leads to injustice. It justifies rejection efforts to prop them up—affirmative action, remedial education—as useless and a waste of precious resources. These ideas were thought to be an extension of the concepts Charles Darwin published in his classic tome, On the Origin of Species. Darwin, of course, was writing about plant life.

When Columbia University historian Richard Hofstadter published the book Social Darwinism in American Thought, 1860 – 1915, in 1944 he ignited a firestorm of debate about whether Darwin’s ideas were permeating the political processes in the United States. During that period, America was steamrolling to historic levels of inequality that culminated in what Mark Twain coined the Gilded Age—the three decade period at the end of the 19th century that saw unprecedented economic inequality with the wealthiest two percent of Americans owning more than a third of the nation’s wealth and the richest 10 percent holding approximately three-quarters of the nation’s wealth.

Defenders of the status quo—those who did not see any harm in economic inequality—denied that the concept of social Darwinism was at work in America. Those in power believed they belonged in power and used their resources to maintain their hegemony. That pretty much describes the America of today where we have witnessed over the past three decades the share of wealth of the top 0.1 percent grow from seven percent to 22 percent.

During the past several decades the supply-side economic theories of Friedrich Hayek and Milton Friedman have informed tax policies that have greatly favored the wealthy. Income taxes were lowered for the highest earners while capital gains were taxed even lower. The idea was to spur new industry and higher economic growth and the economic gains would eventually “trickle down” to the middle and lower income groups in the form of more and better paying jobs.

Never happened. Coupled with the virtual elimination of inheritance taxes except for the wealthiest, the seeds of plutocracy have been sown. Add to those policies Supreme Court decisions removing restrictions on political contributions and we are living in a time when the Koch brothers are ready to commit $1 billion to elect the next president of the United States.

Is this social Darwinism at work? When the “47 percent” are vilified as moochers and takers how does that translate into policies? Is it surprising that as economic inequality has soared, there has been a concurrent assault on the social safety net? Draconian welfare reform targeted poor mothers as the problem rather than people struggling to make a living and singlehandedly raise their children.

Are we surprised by policies that slash food stamps for the hungry, Pell grants for low-income students, and attacks Supplemental Security Income for the disabled? The assault continues on labor unions—particularly public service unions. Wages remain stagnant even as corporations enjoy record profits and off-shore trillions of dollars. Where does this all lead? What kind of society are we creating for our children? What is the tipping point when we truly become an oligarchy?

Lawrence Lessig, on C-SPAN discussing his campaign to get 34 states to call for a constitutional convention to address corruption in American politics, referenced a study that found 96 percent of Americans believe money has a corrupting influence on our society. However, 91 percent believed nothing can be done about it. I imagine there were many who believed nothing could be done about slavery or that women would never be able to vote or that same-sex couples would never be able to legally marry.