bySWHELPER
in Education, News, Social Justice
0
ADVERTISEMENT
Share on FacebookShare on TwitterShare on LinkedinShare on PinterestShare via EmailShare on Reddit

Berkeley, CA – A contingent of 60 graduate students led a teach-in and mediation at UC Berkeley’s School of Welfare today in response to racist comments made by a tenured Professor Steven Segal who was present along with Dean Jeffery Edleson. The action was organized in support of 25 graduate students enrolled in Segal’s Mental Health Policy course, which must be completed this semester by all students in the Community Mental Health concentration.

On Feb. 10, 2015, students advocated to end class early due to offensive and racist comments made by the professor regarding the Black Lives Matter movement. The day prior, Segal had been invited by students to participate in a school-wide conversation meant to create a safe space for students to share ideas for how the social work profession could be accountable to the movement. 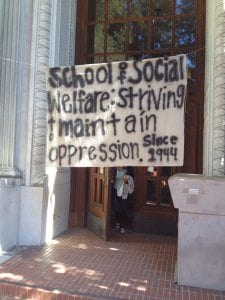 During class on Feb. 10, Segal, a tenured white professor, began by sharing statistics citing Black on Black crime as the real cause of harm to the Black community. He then encouraged the class to join him in a rap that he wrote the night before, claiming that he had been inspired after attending the Black Lives Matter event the prior evening.

The rap he shared in class caused great offense to students, with lyrics that stated the movement, “needed to stop scapegoating the cops.” The professor also silenced students who questioned and pushed back on his reasoning.

Later that day, Dean Edleson e-mailed a school-wide announcement addressing the incident and discussed the event with the Office for the Prevention of Harassment and Discrimination who filed a complaint.

On Feb. 12, Professor Segal issued an apology to the class if he had caused any offense by his comments and that this was not his intent. After the incident, students quickly organized to generate a list of demands, including mediation. After several letters and meetings requesting such, mediation was not offered by School of Social Welfare administration.

Students were afforded two options: to attend an alternate class with a new professor on a different day, or to continue in Segal’s class as usual. Students who were unable to attend the alternate class due to scheduling conflicts remained without a solution. In addition, a healing circle was scheduled the week following the incident for students in the class to process together.

After receiving this news, students requested a mediator to be offered from the University’s Ombudsman’s office. The request was again denied. Students then began to strategize alternate actions to make the classroom safe in order to return. A group of Social Welfare students, who were not in the class, organically came together to support Community Mental Health students who had been at a loss for ways to move forward.

Students in Segal’s class met with Dean Edleson on Feb. 23 to discuss their continued concerns preceding their expected return to either class option that week. The following day, Segal reportedly planned to listen to students’ concerns on their first day back in class since the incident. Dean Edleson was present to observe. Student organizers met on steps of Haviland Hall where they hung a banner that read, “School of Social Welfare: Striving to Maintain Oppression Since 1944.”

At the start of the class, students marched into the building singing “Requiem for Mike Brown” inspired by October’s protests at Saint Louis Symphony. Students Karen Navarro, Vanessa Coe and Erika O’Bannon facilitated the discussion, which focused on identifying problems and envisioning solutions.

Students are seeking individual accountability for Segal regarding his actions, which includes attending an anti-racism training and issuing a public apology acknowledging the harm caused by his actions. Students also called for school-wide policy changes, namely developing a strategic plan that addresses faculty incompetence in facilitating discussions about power, privilege and oppression in their classrooms and academedia, limited course content on progressive social change, abysmal efforts to diversify the student body, and an institutional disconnect with local communities.

Dean Edleson agreed to co-develop the strategy with student organizers, who asked for him to initiate action.

These actions are linked to ongoing student organizing within the School of Social Welfare around Black Lives Matter that began in late November.