On April 14th, Mayor Rahm Emanuel backed a proposal to established a 5.5 million dollar reparations fund for victims tortured by police which included electrocution, beatings, and suffocation to obtain confessions. From 1972 to late 1991, Police Commander Jon Burge and his midnight crew of rogue detectives tortured over 120 men who were largely African-American. After costing the City of Chicago over 100 million dollars in lawsuit settlements, Burge received only 4 1/2 years in prison while still being allowed to collect his tax payer funded police pension. From year to date, Burge has collected approximately $700,00.00 despite his illegal activities and conviction. 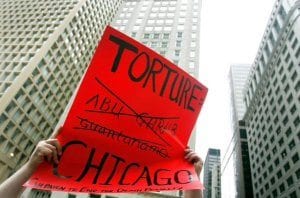 After consulting with over a hundred international human rights advocates representing over eighty nations around the world, it has become clear that even those of us who are deeply compassionate advocates in America have been numbed to the circumstances that present themselves each day in the United States.

If we are to widen our panoramic view of the world, and step out of our relative cultural insularity, there will be a collective realization that Americans have truly entered and accepted (consciously or unconsciously) a torture culture.

The notion of physical and psychological trauma are concepts that are evolving every day among medical, mental health, and the legal field. Research has grown tremendously to the point that we now know trauma extends to situations well beyond war and the conditions that veterans typically develop.

While predominantly white institutions credit Dr. Judith Herman and her book, Trauma and Recovery, for contextualizing trauma in other acute scenarios that occur within everyday civilian life, the work of Dr. Frantz Fanon predates Dr. Herman’s contribution to traumatized and tortured communities in his books,Wretched of the Earth, and Black Skin, White Masks.

Other important concepts such as secondary trauma, vicarious trauma, and compassion fatigue were born into a general school of thought when describing the level of burnout and high stress symptoms that doctors, clinicians, and human rights workers developed over time in their work. The collective effort to raise consciousness and awareness of this issue has been critical to the understanding of what can happen to service providers while working with client populations they serve.

Still, as we continue to wake up to the realities around us within the United States, this awakening process has largely been too slow under international human rights standards. The high rate of gun possession per capita in the U.S., use of the death penalty despite high rates of proven wrongful incarcerations and exonerations, America’s system of mass incarceration and deportation,the astronomical expansion of the prison system, inhumane practices of solitary confinement and deprivation, and the rising tide of police violence and killings within communities of color suggest that the use of the term “trauma,” simply minimizes and serves to desensitize what is really happening around us and more importantly to us.

Why Is Language Important?

Even highly trained trauma specialists who are conditioned to the culture in which we live have largely become desensitized, and often lack confidence enough to assert a reality for what it is. And it is not really their faults if they are required to function within systems that do not acknowledge, ignore, or minimize PTSD and Complex Trauma in the first place. The milieus in which they operate must be able to care and respond to trauma informed providers for them to gain footing in a collective reality that is occurring.

There is often also a persistent feeling of guilt among relatively privileged trauma informed care providers. This can often blind professionals from accurately seeing and identifying truths that may be different from their own.

When applying international human rights standards to issues such as violence against women, incarceration, detention, etc. the U.S. standard falls egregiously short in its medical semantics for domestic torture. In this regard, there is a sense of imperialism that is attached to the word, “torture,” as if it is something primitive and only happens within the boundaries of indigenous cultures, not westernized ones. Yet, it is a nation like the U.S. that is in the technological position to carry out torture practices whether in broad daylight and in plain view or clandestinely.

Enforcing the Convention Against Torture

Using the term, “torture,” in lieu of trauma also demands a more urgent response from those doing and committing the torturing and especially the masses of well-meaning people that have compassion but have collectively been taught to care less and minimize the problems their neighbors endure.

We have grown so culturally complacent with the horrors that are taking place, that labeling something as “torture,” would simply jolt us out of that complacency like a splash of ice water. We need to be jarred awake and perhaps calling everything trauma only makes us unresponsive.

The Convention Against Torture, in fact, is an international human rights instrument that enforces this notion and demands that we recognize the torture that occurs. From a legal perspective, if we look at the language, it rarely uses the term trauma.

We will only be equipped to adequately respond to various crises that are repeatedly happening and are seemingly unending when we wake up to the realities that are occurring, rather than using flowery language that serves to minimize or hide certain truths; that serves to numb us and desensitize us from the high degree of pain that people truly experience.

Howard University Debates: the Evolution of Ferguson A Movement or Moment

Shreya Mandal, JD, LMSW works at Brooklyn Defender Services in New York. She recently joined the Harvard Program in Refugee Trauma focusing on Global Mental Health and Trauma. Ms. Mandal worked as an in-house mitigation specialist for The Legal Aid Society of New York from 2004 to 2014 and briefly worked as a public defender at The Bronx Defenders. Ms. Mandal is also a recipient of the 2009 National Association of Social Workers Emerging Social Work Leadership Award.

Not an Average Day in the Office: Social Workers from the US to Madrid Come to UK Workplaces for a Day of Unique Learning