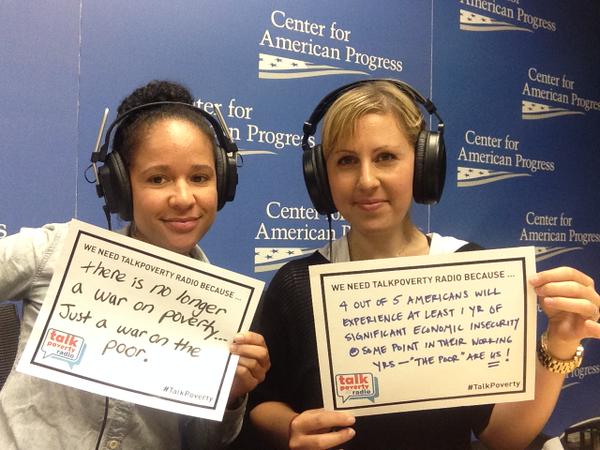 Citizens living below the poverty line are often treated as an absent third party while policy makers and service providers decide what “they” need in order to become productive members of society. Debates are launched about how the poor game the system, their laziness, immorality and poor choices leading them to a cycle of generational poverty, but how can we be the experts on communities in which we do not live? Typically when we do let someone struggling with poverty have access to a platform to speak, we are using them as a testimonial to provide proof or support for our decision-making.

However, TalkPoverty is taking a nuanced approach to advocacy by creating a platform specifically to elevate the voices of low-income communities. What will happen if we let members from impoverished communities be stakeholders in the policy making conversations that affect them directly? What could we learn? In social work, we have a term called client-centered practice which means the client is the expert on their life, but it our job to help them use that knowledge to improve their outcomes.

This week, I had the opportunity to chat with Tracey Ross who is one half of the dynamic duo hosting the TalkPoverty Radio Show on the We Act Radio network beginning April 30th at 4:00 PM EST.  Check out our conversation below:

SWH: Can you tell us about TalkPoverty and your role with the organization?

Tracey: TalkPoverty is actually an arm of the Center for American Progress’ poverty team. Just over a year ago, Greg Kaufman, former poverty reporter for The Nation, joined CAP’s poverty team as a Senior Fellow and started TalkPoverty.org, a blog that features stories from low-income families and other community members who explain the impact of our public policies and provide information on grassroots actions across the country helping build to momentum and dramatically reduce poverty.

Earlier this year, we had the opportunity to launch TalkPoverty Radio on SiriusXM Insight, produced by Greg and our colleague Alyssa Peterson.  On April 30th, we’re relaunching the show on the We Act Radio network, a progressive radio station in the heart of DC’s Anacostia neighborhood. We’re using this as another platform to lift up the untold stories of some of the 45 million Americans living below the poverty line.

While this is a serious topic, the show manages to be both entertaining and informative as we work to dispel myths, offer solutions, and call out people and structures creating barriers for people struggling on the brink. Each week, my co-host, Rebecca Vallas and I will speak with grassroots advocates, journalists, elected officials and people living in poverty in order to share important perspectives with our listeners.

SWH: What are the top priorities for TalkPoverty, and what activities are you currently engaged in to accomplish those goals?

Tracey: One of our main goals for TalkPoverty Radio is to increase the quantity and quality of poverty reporting. Less than 1 percent of media coverage is dedicated to reporting on poverty. And while there are great reporters covering this issue, there are many news outlets that rely on stereotypes about people living in poverty and don’t provide a nuanced discussion about the causes and solutions. For instance, while many people know that roughly 15 percent of the population is living in poverty, based on many news stories, you would think it was the same people year in and year out. In reality, 4 out of 5 Americans will experience at least one year of economic insecurity at some point in their working years. This is a failure of our economy.

Further, we understand that people experiencing poverty are the real experts, so we give airtime to low-income people, so they can speak for themselves.

SWH:  What are the biggest challenges and barriers you face in creating awareness on poverty?

Tracey: Unfortunately, a majority of Americans report having a family member living in poverty, so I think we’re at a point in time when people are increasingly aware of some of the causes of poverty. A poll we conducted revealed that nearly two-thirds of Americans strongly believe that poverty is primarily the result of a failed economy rather than personal failings. The public also express very strong support for key policies to fight poverty, such as increasing the minimum wage, expanding health care coverage, supporting nutrition assistance, etc.

I think the real challenge we face is holding policymakers accountable. While leaders from both sides of the aisle are increasingly talking about poverty, conservatives in Congress are blocking or cutting key programs that the public supports and that help working families. And we need more progressive candidates to include fighting poverty in their platforms. The public supports these policies, so we need to build a movement to ensure policymakers are doing the public’s will here.

Want to see these smiling faces in person? Come out @ 5 to Laughing Man to celebrate the #TalkPoverty Radio's launch pic.twitter.com/YCtjBolAsZ

SWH: How can others engage and support TalkPoverty’s efforts?

Tracey: The blog is always looking for contributors from low-income families, but we also hope people will share links to the blog and the show. While many people support specific policies to fight poverty, we need to ensure that this issue gets the attention it deserves, and that people hold elected officials accountable. Lifting up the stories of low-income people, as well as advocates like yourself, will bring life to this issue and will hopefully contribute to a the growing movement for a more equitable economic system.

As our show’s tag line states: “Tune in. Fight back.”

A Boy or A Girl or A Person: the Lack of Recognition for Intersex People