Sexual Assault is not a Misconduct Issue, It is a Criminal Issue

Every April is Sexual Assault Awareness Month (SAAM). During these thirty days, survivors, students, professionals, and activists’ march throughout the streets and institutions, campaign on social media, and appear on television to bring awareness to the issue of sexual assault.

There are posters, displays, and drives created to spread the word about the prevalence of this issue—that one in three women will be sexually assaulted during her lifetime.  There has already been much discussion about sexual assault, as the media has reported many incidents this year.

From celebrities, NFL players, executives, fraternity members, college students, to the next-door neighbor, it seems we have seen it all. As month of April and SAAM campaigns come to a close, it is important to note that awareness is not nearly enough. Instead, policies must change in order to truly make a social change in the prevalence of sexual assault. 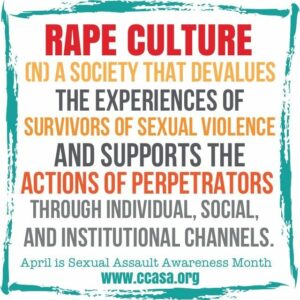 The surge of media coverage surrounding sexual assault has focused largely on college campus sexual assaults, and a report from the White House asserts that one in five college women are the victims of sexual assault. In 2014, the U.S. Department of Education placed higher education institutions under investigation for “possible violations of federal law over the handling of sexual violence and harassment complaints”.

This investigation spurred from complaints filed against colleges by students who were victims of sexual assault and rape, as well as federal audits alleges college campuses actions resulted in the underreporting and mishandling of Campus Sexual Assault complaints. As of March 2015, 104 colleges and universities have been added to the list of institutions under federal investigation.

Many university administrations that are under federal investigation have created a “Sexual Misconduct Task Force” that meets to address the issue of sexual assault on campus. The language within these task forces, orientations for new students, and regular correspondence is noteworthy. It seems that the term “sexual misconduct” is used in times when sexual assault shall be used. This is not merely semantics; it is a matter of legality.

The term “misconduct” refers to when someone behaves in an improper or unprofessional manner. It is logical for universities to use this term in the code of ethics when discussing issues such as cheating or plagiarism. On the contrary, the term “sexual assault” is defined as “any type of sexual contact or behavior that occurs without the explicit consent of the recipient. Falling under the definition of sexual assault are sexual activities as forced sexual intercourse, forcible sodomy, child molestation, incest, fondling, and attempted rape” according to the Department of Justice. It is logical to use this term for a criminal offense.

This dichotomy in semantics seems to be an issue throughout the vast majority of colleges and universities. That is, administrators place sexual assault and rape under campus “misconduct” in official documentation. The question is why?

These are some of the most prestigious educational institutions and the administrators are cognizant of how language greatly impacts one’s view of the institution. By demoting the language of sexual violence to sexual misconduct, universities are placing the issue of sexual assault in the same category as plagiarism. Consequently, reducing the seriousness of such incidences.

By addressing sexual assaults as a campus misconduct issue, the faculty and staff may view such incidents as violations of the student code of conduct. This may lead to the failure to treat these incidents as criminal cases, as they are ruled in federal law. That is, sexual assault and rape are criminal offenses that must be investigated by police departments and tried in a criminal court; if found guilty, perpetrators are charged with a felony.

Notice the contradictions? College and university presidents agree that sexual assault is a problem in America, however very few feel that it is a problem on their specific campus. Could it be that the language used by administrators is affecting how the institutions view the issue of sexual assault?

Maybe if colleges and universities began to address sexual assault for what it is—a crime—there may be less confusion if it is an issue on their campus. Though, the hesitation may stem from administrators disclosing that such crimes exist on their campuses. Yes, if accurate numbers were reported, students would be more timid to attend these colleges and universities. Yet, if administrators treated sexual assault as a crime, then trained law enforcement professionals would investigate these case and take rape cases out of the hands of the Department of Student Affairs which will make campuses safer.

College and university policies must change so that sexual assaults are depicted and treated as criminal cases. By doing so, proper trainings, resources, and judicial processes could take place, lead to prevention and proper handling of sexual assaults on college campuses—nationwide.

A Boy or A Girl or A Person: the Lack of Recognition for Intersex People

Kristin Kay Gundersen is a graduate student at the University of Southern California in the School of Social Work. Kristin serves as Research Fellow working alongside experts in the field conducting research on the issues of sexual assault, violence prevention, and rape culture, and is a published author in academic journals. She is a member of the USC Sexual Misconduct Task Force and is deeply committed to advocacy work, public speaking events, and in educating individuals how to thrive through life’s challenges. Kristin is the Vice President for a nonprofit organization that serves survivors of sexual and gender-based violence.