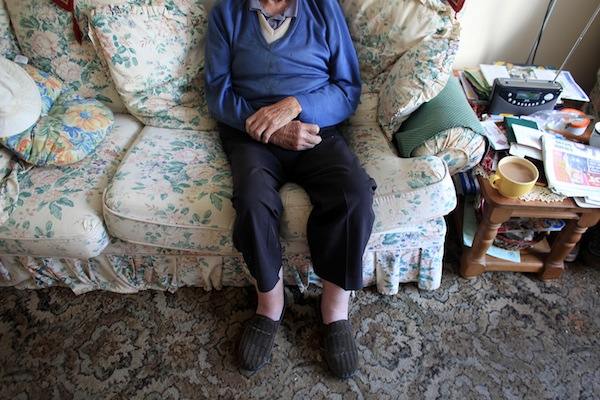 With our fast paced lives in a technological age of instant gratification and easy distraction, it’s no wonder news channels are beginning to advertise “distractify” sections on their web pages. It’s not difficult to see how quiet unassuming people may get pushed aside, and their needs relegated to the back burner. We assume that they’ll get social security which will provide some basic living. After all, we are told that all Americans can get social security once they retire. Right?

But, retiring means that you have worked, and social security is based on earnings over your lifetime. For homemakers, this doesn’t help much. We assume that they’ll receive Medicare, and yes we might even hear about the problems and costs associated with what Medicare doesn’t cover. We might even assume that the elderly will get food stamps without realizing just how meager food stamp grants really are. In an age of cuts to social programs, not only are all of these so-called entitlements at risk, programs such as food banks, meals on wheels, and utility assistance are also at risks which leads me to tell you about Mrs. Jones.

Mrs. Jones* is a vibrant and lovely elderly woman, free with stories of years gone by and quick with an ear for friends and neighbors. She loves working in her garden and sitting on her porch chatting with passers-by. Many in her community in Atlanta look forward to the spritely older woman and her tales. Many more loved her homespun wisdom and down home recipes, both of which she’s quick to share.

So, it was with great shock and profound sadness that the community witnessed its first day without the fixture that was Mrs. Jones and the loss was palpable. The shock and sadness only increased as the story behind Mrs. Jones’ absence spread.

In all the time she was cornerstone of the community, the very bedrock that most communities seek to cultivate, no one guessed she might have a secret. Mrs. Jones was used to being relied upon in her community and never thought to ask for anything in return. While her neighbors were friendly, caring, and even supportive of her, no one thought to inquire into how this lovely elderly woman, a widow who’d largely been a homemaker, was fairing. Sadly though, Mrs. Jones is one of countless citizens in an unenviable position. She is one of the 3.4 million citizens aged 65 and over in our country who live in poverty making her part of an extremely vulnerable population and one that is often forgotten in our society.

As a widow she did qualify for survivor’s benefits, but as someone who was largely a homemaker, her social security was meager at best. She did happen to qualify for Medicare, but was judged to be over the resource limit for food stamps. Living alone without dependent children reduced her benefits limit to the point that she was deemed to make too much. In short, after a lifetime of raising children, keeping house, and being a good and supportive wife to her husband all things lauded as family values to be protected, the system failed Mrs. Jones.

On the night where we pick up Mrs. Jones’ story, the night before her community witnessed the absence of its cornerstone, Mrs. Jones dialed 911 in a panic. She was having incapacitating abdominal cramps coupled with vomiting. When she arrived at the emergency room she was quickly diagnosed with a bowel obstruction and raced into emergency surgery. Afterward she was admitted to the ICU to recover from surgery and to stabilize her condition. A few days after she was admitted, a concerned friend came to visit and that’s when the true tragedy of Mrs. Jones case was revealed.

Her neighbor, perhaps one of her closest friends, knew that Mrs. Jones had been diagnosed with a heart condition, and that the treatment course was not covered by her insurance. This is not uncommon among the elderly who frequently have too many medical bills and not enough money or insurance. Many Americans think that supplemental insurance like Medicare part D picks up the rest, but the truth is it doesn’t cover everything and creates what some call the Medicare donut. In this position, Mrs. Jones was left to decide between medication and other necessities like food, which also is not uncommon among the elderly.

What makes this story less common, but by no means unheard of, is how Mrs. Jones decided to solve the problem. With too many financial needs and too few dollars at her command, Mrs. Jones decided that she would have to resort to eating dog food to afford her medications. That’s right, as she was trading recipes with her neighbors, offering an ear to all and being the foundation of her community, Mrs. Jones had resorted to eating dog food.

Mrs. Jones had been failed by the very society of whom she was a bedrock. Even more tragically, she is now saddled with even more medical debt which lead to her illness in the first place. Only time will tell how Mrs. Jones’ story will end. With her grown children having moved away and her husband  now deceased, it is very likely her community will forever lose its cornerstone. The debt she’s incurred will drive her to even more austere measures and ultimately lead to her being placed in assisted living.

Mrs. Jones’ story and the stories of millions like her doesn’t have to end this way. It doesn’t have to be a story of poverty, increased health care costs, and increased demand for limited assisted living spaces. The only solution that eliminates poverty and corrects societal tragedies like Mrs. Jones story is a universal basic income.

Had Mrs. Jones lived in a country that provided a guaranteed basic income for its citizens, Mrs. Jones would not live in poverty. She’d receive a stipend that guaranties her a comfortable existence where she could afford food and adequate health insurance. Insurance where her medication is covered, thus eliminating the strain of poverty on our health care system.

Clearly our current system, which leaves 3.4 million of our elderly in poverty, estimates as many as 44% of seniors would be living in poverty if it were not for social security. As stated in the findings by Center for American Progress, the system is broken, and it’s time to find a solution.

Editors Note: *Mrs. Jones and staff at Emory University Hospital spoke to me on condition of anonymity. Mrs. Jones name was changed to protect her privacy.

After nearly a dozen years of working in public schools in 2 different states, I decided to switch professions in which I am currently pursing a Master's of Social Work at University of New England. While working on a dual concentration in clinical practice and advocacy, advocacy is my passion. View all posts by Ann Tholl