The New Koch: Anyone Buying?

byDr. Charles Lewis, Jr.
in Politics, Social Justice
0
ADVERTISEMENT
Share on FacebookShare on TwitterShare on LinkedinShare on PinterestShare via EmailShare on Reddit

Back in April of 1985, the Coca Cola Company sensing a decline in its leading share of the cola market, tried to rebrand its soft drink by tweaking the secret formula that had been successful for nearly a century. Thus we got the “New Coke.” Unfortunately, consumers were not convinced that the New Coke was better than the old Coke. In fact, they saw through the marketing ploy and demanded that the Coca Cola revert to its true self. Less than three months later, Coca Cola began restocking shelves with what became classic Coke.

Now, it seems Charles and David Koch (pronounced “coke”) have grown weary of their characterization as villains. They are tired of being viewed as fat cats who are making a mockery of our election process by spending millions to support Republican candidates who have become the pawns of the rich and well-to-do—the job creators.

Supply-side Republican tax policies have been very favorable to the rich while efforts to shrink government by scaling back resources for social welfare programs have hurt the middle class and the both the working and non-working poor. Reductions in Pell grants make it harder for middle and low-income families to afford college education. Assaults on unions and a 16-year freeze on the minimum wage have exacerbated wage stagnation.

So during their retreat last weekend in Dana Point, California, the Koch brothers began their campaign to rebrand as champions of the poor—zeroing in on criminal justice reform as a particular concern. Fellow donors and beneficiaries like the five Republican presidential candidates attending the retreat embraced this new brand of Koch. But will it sell to the general public? United Negro College Fund (UNCF) president Michael Lomax warmed up to the brothers last year when he accepted $25 million from them. Former Obama administration official Van Jones became another strange bedfellow when he teamed up with the Koch brothers to push for passage of the SAFE Justice Act. 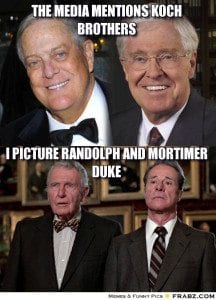 The Koch brothers would like us to believe that policies promoted by the Cato Institute—the think tank they created—have negligible negative impact on the poor and middle class but are advancing their principles of limited government.

For them and other patrons of Ayn Rand, smaller government means more freedom. Taken to its logical extreme—the smallest government results in the greatest freedom—but for whom?

They would have us accept that unfettered, unregulated capitalism would create a more just society, but only if you buy into social Darwinism and have no problem discarding the poor and less fortunate.

It’s the kind of thinking that empowered anti-tax maven Grover Norquist who said he did not want to abolish government but to “get it down to the size where we can drown it in the bathtub.” Depriving the government of revenue would surely shrink it.

Norquist’s organization Americans for Tax Reform boasts on its website that nearly 1400 elected officials—including 49 Senators and 221 Members of the House of Representative—have signed the Taxpayer Protection Pledge—avowing not to raise taxes. It is a silly pledge. The cost of living does not stop increasing because taxes are frozen. The population continues to grow and our infrastructure continues to wear down.

Then, there are those annoying expenses like war. The idea of conflating smaller government and freedom doesn’t wash. Dictators can have small governments. The government should be as large as needed to efficiently promote the general welfare. Libertarians and conservatives believe government assistance promotes dependency and makes us slaves of the government.

The purpose of the pledge was to reduce government revenue until there was little choice but to begin dismantling the welfare state through block granting of social service programs and attacking the solvency of Social Security and Medicare. It’s not about freedom; it’s about ideology.

The results have been disastrous. By not taking in adequate revenue through taxes, future generations will be saddled with 18 trillion dollars in debt and counting. Our system of government is corrupt beyond belief because the wealthy are able to finance policies that increase their wealth.

Economic inequality is off the charts. Millions of Americas, particularly children languish in poverty with minimal hopes of escaping. Thousands forgo college because of the enormous expense and concomitant burden of student loan debt. Who knows what inventions and cures are being lost because we live in a society where only the haves can optimize their talents and skills.

The new Coke was a flash in the pan, and I am not buying the new Koch either. We’ve seen this before with compassionate conservatism. It has a nice ring to it, but it’s the same old song.

Money: What Rich Social Workers Do To Make More