byDr. Janina Scarlett
in Culture, Mental Health
0
ADVERTISEMENT
Share on FacebookShare on TwitterShare on LinkedinShare on PinterestShare via EmailShare on Reddit

I grew up on fiction. It was brain food to me. I generally preferred to read books to just about any other activity. Over the past few years I’ve been incorporating fictional characters into Superhero Therapy. For me these characters hold a deep and personal meaning, after all, some of them actually helped me recover from my own traumatic history.

On April 26, 1986, there was an explosion at the Chernobyl Nuclear Power Plant, located in Ukraine. I was just a few months short of 3 and was only a few towns away. The people in Ukraine didn’t know about the disaster, or at the very least about the extent of it. 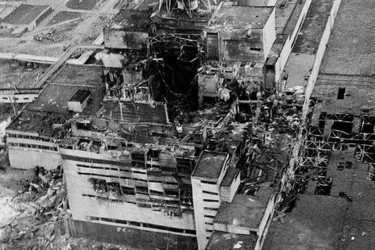 This is my first memory. I remember some parts of it quite vividly while others were filled in by my parents. It was May Day, which is a big holiday in Ukraine, where I was born and raised. My parents and I were marching in the parade along with hundreds of other people. I was sitting on my father’s shoulders and holding a red balloon. The music was playing and despite being overwhelmed by the amount of people present there, I was excited.

To my left there was a scream.

Someone, I think it might have been a woman, was convulsing on the ground. Some people ran to call the paramedics.

Then other people started to fall down. Some were bleeding from their noses.

My father kept me on his shoulders and he and my mother ran all the way home. It wasn’t until some time later that we found out about the extent of the explosion and the amount of radiation spilled. Until then, completely unaware, we continued drinking the water from the faucet, going outside, and eating fresh fruits and vegetables. All of these were poisoned.

When the news broke, we were all encouraged to seek medical attention and underwent iodine treatments. Still, many people suffered from some kind of physical (and many also psychological) illnesses as a result. For me, I started having frequent nosebleeds that wouldn’t clot for a long time and severe migraines.

My migraines were especially intrusive. There was one time, it might have been when I was around 7 or 8, I was in so much pain that a blood vessel in my eye popped. On other occasions my migraines would lead to seizures.

My migraines seemed to be triggered by weather and environmental changes. When the barometric pressure would drop (before it rains) and also when there would be radiation changes in the atmosphere (such as solar flares, for example), that was when I was most likely to experience these symptoms.

I also started having nightmares and was too afraid to sleep without a light on. For many years after that incident I was really nervous about being in large crowds, and did not want to talk about anything related to Chernobyl (I still struggle with this last one to this day). I obviously didn’t know it back then, but I was struggling with PTSD.

Things got worse when my family and I first moved to the United States. I was in 7th grade, did not speak English too well, and most people my age did not have a good understanding of what radiation poisoning was nor what a seizure disorder was. On a couple of occasions I would overhear people cautioning one another not to touch me because I might be “radioactive.”

Feeling extremely lonely and not having any friends for an extended period of time I started to feel depressed. I avoided people for the fear that they would make fun of me or would judge me. During a parent-teacher conference, my homeroom teacher told my mother that I was a good student but that she couldn’t figure out why I always looked so sad. When my mother asked me about it, I shrugged it off. How could I tell her that I felt like a freak?

For years I felt alone and ashamed, and even disgusted with my physical and emotional experiences. There were times when I just wanted to die.

Until I saw the first X-Men movie.

I didn’t know much about the X-Men when I went to see it but from the moment I realized that they were mutants, I was hooked. These incredible people all had some kind of a genetic mutation, some of them due to radiation exposure, just like me. And somehow realizing that I was not alone, even if the people I was relating to were fictional, for the first time in many years helped me feel connected…helped me feel…normal.

The character I especially connected to was Storm because she could control the weather (how cool is that?)! 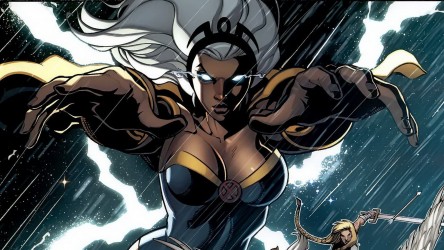 The more I found out about Storm, the more I identified with her. Storm (real name: Ororo Munroe) also had a childhood trauma history. When she was 6 years old, her parents were crushed to death by a fallen plane. Ororo barely made it out alive. After that Ororo became claustrophobic (having an intense fear of tight spaces), which persisted even after she had joined the X-Men.

Storm’s powers come from her connection with the Earth and her emotions allow her to influence the weather. Somehow learning this made me rethink my own symptoms as my own special way of connecting with the Earth, like Storm. I feel when the Earth changes and when the weather changes. This reframe allowed me to view my symptoms as a kind of Superpower. And somehow, in this process my symptoms began to change. I still have them but they no longer stop me from doing what is truly important to me. I’ve made space for these symptoms and they made space for me.

And somehow from this adventure, Superhero Therapy was born. After having spoken to many people, having heard so many stories, I am convinced that if we connect to someone, be it real or fictional, we just might find the very kind of strength and inspiration that we need to recover.

Superhero Therapy is run by Dr. Janina Scarlet, a Licensed Clinical Psychologist and a (mad?) scientist, intending to take over the world with geek culture and compassion. Superhero Therapy refers to incorporating characters from geek culture, including Superheroes and other characters from comic books, as well as characters from fantasy, science fiction, and video games into evidence-based therapy such as cognitive-behavioral therapy and acceptance and commitment therapy. To learn more visit her at www.superhero-therapy.com