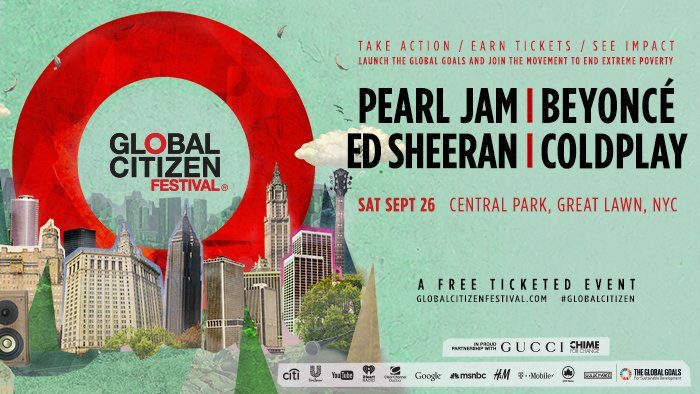 Global Citizen is a community of people committed to tackling societal challenges in the world and encouraging other people to do the same. Global Citizen believes courageous actions taken by those who believe in a better world will shape history and change society. Extreme poverty is one of the greatest injustices at the present time and it strips people of their basic rights as well as access to opportunities.

Whilst extreme poverty has halved in the last 30 years, there is still more work to do. Poverty can be a vicious cycle but if we come together to learn and take action we can change the rules trapping people in these cycles. Global Citizen does not ask for charity, it asks for help in fighting injustice. Global citizen wants people to advocate and use their passion to take action on issues that will help eradicate extreme poverty.

Global Citizen have several themes that we all can become involved in:

The first theme is food and hunger, and it is thought that people who are well fed will perform better in education and create more stable communities which will allow them to take advantage of the opportunities to end extreme poverty. The world has enough food to feed everyone, and we need to ensure this is spread more equally! The second theme is education, and by focusing on education for all children, it will encourage more leaders to lead society out of poverty and build communities that will thrive.

There are still millions of children without a good standard of education. Education is a basic right that we all deserve. The third theme focuses on health because everyone must be healthy in order to end extreme poverty. Healthy people can live fuller lives and take more opportunities to develop themselves. Health is vital for pregnant mothers, new-borns and children who require vaccines and access to healthcare that many are not receiving.

It is estimated that over a billion people suffer the indignity of having to defecate in open areas which is why water and sanitation is a top priority of Global Citizen. Waste systems and clean water are not a luxury, and it is a necessity that could save millions of lives each year and help eliminate diseases. Finance and innovation is also highly important. By funding development, it will help the global community to empower people to make changes and innovate in order to help themselves break the poverty cycle.

Women and girls are often subjected to some of the harshest aspects of poverty.  Global Citizen believes promoting better education for women and girls will also them become powerful leaders. A great example of the power of education for women and girls is Malala Yousafazi who was shot by the Taliban for speaking publicly about the importance of girl’s education. I received an email that Malala has now started a petition to encourage support to stand up for over 60 million girls around the world who do not receive the opportunity of education, which you can also sign here. This shows we can all make change, but we need to take the steps to do it like Malala Yousafazi.

Most importantly, we should not forget about the environment. Working towards these goals will mean more healthy people who can help take care of the earth and protect those who live on it. To participate and work on these themes Global Citizen have recommended actions such as tweeting, writing, making phone calls and/or email. These can all be found by clicking on each theme on the Global Citizen website. By completing these simple actions, we can make the goal of ending extreme poverty by 2030 happen a lot sooner!

On September 26th, Global Citizen will host its annual Global Citizen Festival on the Great Lawn of New York’s Central Park which also coincides with the launch of the United Nation’s global goals. To date more than 150,000 people have attended the festival with more than 30 million watching the festival.

The festival channels the power of thousands of global citizens to achieve policy and financial commitments that shape success. The Global Citizen Festival is supported by many brands from YouTube, to H&M to Unilever and many more. YouTube will feature a special livestream and a live simulcast of the full concert will be available on MSNBC and msnbc.com.

Screenwriter Richard Curtis will also produce a one-hour special to air on NBC on Sunday, September 27th. For all those in the UK, don’t worry. It will also air on BBC One on Monday, September 28th. The festival also involves artists such as Beyoncé, Ed Sheeran and Coldplay to name a few. The Global Poverty Project is a registered non-profit organisation who works in partnership with business leaders, world leaders and global citizens to call on governments to support policies that would impact the poor.

So far, Global Citizens have taken a massive 2.3 million actions to fight against extreme poverty in the last four years which have resulted in 87 commitments and policy announcements including cash commitments which are valued at around $18.3 billion.