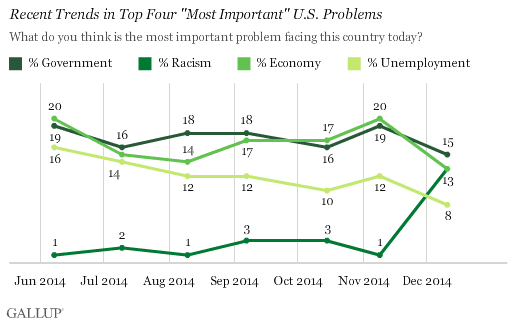 Policies that exclude and deny opportunity to specific groups of Americans are always counterproductive.  Ultimately, any economic gains that may accrue to one group of people from reduced competition for perceived scarcity of resources will be offset by the lack of productivity of those who were denied.  The output of the economic pie is equal to the sum of its parts.  The greater the productivity of the maximum number of citizens, the larger the pie will be for everyone.

Failure to produce by those same citizens who were denied comparable opportunity for success will invariably cause them to be castigated and condemned for their lack of productivity.  Misguided policies based on racial bias, sexual identity discrimination, and other forms of prejudice contribute to a fractured society that will never reach its full potential.

Conservatives readily point to the cultural defects of the poor—particularly poor blacks—as their primary impediment to success and not public policies.  However, they never talk about the role majorities have played in contributing to the pathology that exists in black communities.

There have been consistent efforts over time to deny black people anything near adequate education—from the time it was a crime to teach black people to read, to Jim Crow laws and separate-but-equal policies that resulted in inferior schools.  When these historical facts are presented they are shrugged off as part of a regrettable past. Affirmative action was discredited as an unfair attempt to right wrong by doing wrong.  It was playing to white guilt in order to extract undeserving benefits from the government.  It’s all about wanting “free stuff.”

Ironically, the “free stuff” that President Obama and the Democrats are supposedly so gleefully doling out to the lazy poor for votes was never intended to help black people.  New Deal policies were designed to excludesignificant segments of labor where blacks where overrepresented. Martin Gilens, in his book Why Americans Hate Welfare, attributes the disdain for cash assistance policies to media-generated public perceptions that poverty is largely a black problem.

President Ronald Reagan played on these anxieties with references to the Cadillac-driving welfare queen and the “strapping young buck” who live large on T-bone steaks purchased with food stamps.  The false notion that the nation overspends assisting vulnerable populations continues today even as wages remain stagnant and the federal minimum wage is mired at $7.25 an hour.

These myths of blacks and the poor wanting free stuff and not real jobs gave credence to Grover Norquist and the Club for Growth’s campaign that coerced commitments from Republican legislators to never vote for tax increases.  The result has been a hollowing out of the middle class and despair among many whites about the vanishing American dream.  There appears to be a correlation between these trends and recent spikes in heroin use and mortality rates among lower middle-income white Americans.  Many white people continue to see blacks and immigrants as the source of their economic malaise.  The real culprit is the abandonment of shared prosperity.

The fifties, sixties and early seventies were prosperous times for an American middle class that was predominantly white.  Progressive tax rates were at their all-time high.  Labor was not taxed at a higher rate than capital gains.  The economic pie grew steadily and everyone got a significant slice.  This growth came to a halt with conservative and Republican-sponsored supply-side tax cuts and severe cuts in estate taxes that all but ensured the hegemony of the mostly white wealthy class would remain in place for decades to come.  The enemy is the boundless greed of the plutocrats.  They are competing with each other to see who can accumulate the most. Everybody wants to be in the top ten of the Forbes 500 and nobody is satisfied being number five.

Anemic economic growth is said to be the new normal, and it does not have to be.  We are a consumer driven economy that functions best when more people have disposable income to buy goods and services and create new businesses that provide jobs.  It’s not rocket science.  We need policies that invest in human capital—that expand opportunity.  Scarring tens of millions of people through misguided incarceration policies helps to wreck the economy.

There is plenty of room to grow in the United States.  We have not come close to achieving our full potential.  According to the U.S. Census, 94.6 percent of land in the United States is undeveloped. There is room to give a path to citizenship to the people who are already here and several million more if we share the prosperity and not give it all to the wealthiest Americans.  Poor people, if you would only vote.

Understanding the Code of Ethics in Social Work Practice

Understanding the Code of Ethics in Social Work Practice