bySean Erreger
in Human Rights, Social Work
0
ADVERTISEMENT
Share on FacebookShare on TwitterShare on LinkedinShare on PinterestShare via EmailShare on Reddit

Recently, I had chance to watch “The Inequality Movie” narrated by former Secretary of Labor Robert Reich where it outlines how the United States has one of the poorest distribution of wealth in the world. This was a great movie highlighting the need for change on the legislative and policy levels. Although the film focuses on inequality in the United States, it is no surprise this is an issue faced by many societies around the globe. In response to the inequality around the world, Social work has developed it’s first global response to the issues of inequality and the distribution of wealth. 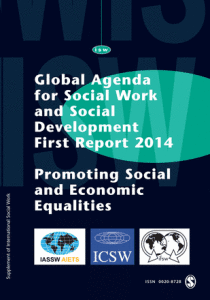 In the last four years, three lead organizations facilitated conversations on each developed continent to address the cause and solutions for those most effected by inequality. Through the leadership of the International Association of Schools of Social Work (IASSW), International Council on Social Welfare (ICSW) and International Federation of Social Workers (IFSW), social workers from around the wold are attempting to problem solve and develop actionable measures to address inequality.

The Global Agenda for Social Work and Social Development: First Report -promoting social and economic equalities at first appearance seems like a humongous effort, but it demonstrates the ability of the profession to works towards collective impact in coordination of efforts to improve outcomes for those we serve.

The report examines the unique conditions of each continent and how social workers presented their solutions. Policy changes and macro interventions were at the heart of this report.

Social Workers in this forum called upon the UN to develop regulations to curb this process. They also noted that there was a huge disconnect between social policy and those most affected by it.  Solutions need to be more locally driven.

Social work is getting more organized in this region focused on disaster relief, more direct engagement with consumer groups, and respect for indigenous peoples.

The primary problem is drastic cuts in programs since the economic crisis in 2011.  The group gathered evidence of how these programs being cut increased suicide, joblessness, and homeless rates. They have placed emphasis on health inequalities to treat these issues are more of a public health problem.

Politics in this region have often quieted more macro-efforts  however their  voice is getting louder. The focus has been on more community organization and involve clients in more decision making.

As a result of these conversations the theme became “Asserting Your Voice“.  The Global Social Work agenda about Promoting Social and Economic equality will be based on the following values and actions:

•• The cornerstone of a thriving economy is a stable, well-resourced and educated community.

•• People are happier and wellbeing is better for all in more equitable societies.

•• When people have a collective voice, they are more able to advocate for their rights and participate in decision-making processes resulting in better wellbeing.

Social Work clearly have a lot to offer the world. The theme of inequality is at the heart of our practice. Problem solving inequality seemed like a grandiose project, but the global social work community broke it down into manageable steps.  I hope this inspires you to let your voice and the voice of the individuals you serve be heard.

Wilkinson, R. and Pickett, K. (2009) The Spirit Level: Why Equality is Better for Everyone. Harmondsworth: Penguin

How To Practice Your Faith At Work